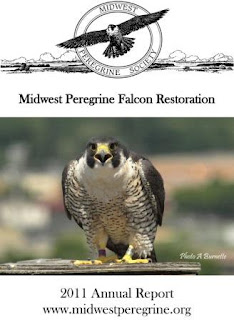 TRC would like to share our most recent report for 2011 on the Midwest Peregrine Reintroduction, an effort in which we are proud to have been a leader.  It’s not often that such a conservation success story can be told.

A quick background on the project: (full text can be found here): Before WW II and the widespread use of DDT, there were about 40 pairs of peregrine falcons nesting on cliffs along the Mississippi River and the Shoreline of Lake Superior and about 300 pairs total in a region extending from east of the Rocky Mountains to the Atlantic Coast.

Peregrines were extirpated by about 1962 over much of North America, east of the Rocky Mountains and south of the Arctic by DDT poisoning, which was banned from further use by the EPA in 1972.

Starting in 1982, TRC’s co-founder Dr. Patrick Redig and Professor Harrison “Bud” Tordoff of the Bell Museum of Natural History began the work that would effectively bring the peregrine back to not only the historical cliff sites that were their homes, but also introduced the species to the urban sites such as skyscrapers, buildings and bridges that they can be found on today.  Dr Redig and The Raptor Center continue to coordinate the banding efforts of 13 Midwestern states and two Canadian provinces, monitoring the productivity of over 200 pairs in the Midwest alone.  A database of banded birds is here, at the midwestperegrine.org site.
Posted by The Raptor Center at 4:55 AM