We thought it would be fun to share some photos of the differences in plumage, and particularly the "belly bands", of two of our education winged ambassadors.  Both Rowan and Luta are 2015 hatches, so they are about the same age.  However, as you can see, their plumage is very different, which is typical for red-tailed hawks.  Read about Luta and Rowan on their web pages.
Posted by The Raptor Center at 7:48 AM No comments:

Vulture Valentine from The Raptor Center 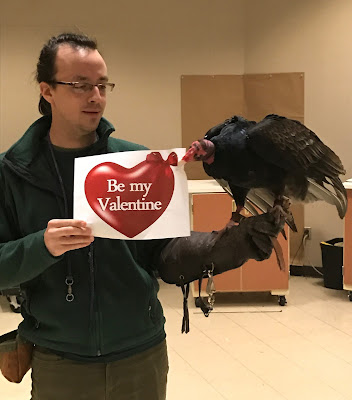 We wanted to send this valentine to all our friends. We could not decide who had the most fun for the "photo shoot" - Nero the turkey vulture, or Dan Hnilicka, our non-feathered staff.

To all of our wonderful donors: we send our heartfelt thanks to you! Your generosity ensures that we can continue caring for sick and injured raptors, identify emerging environmental issues, and provide education opportunities and programs for our community. Thank you for your generous support. Happy Valentine's Day! 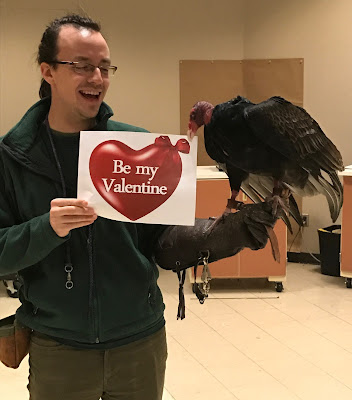 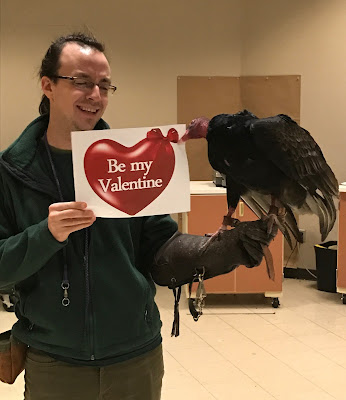 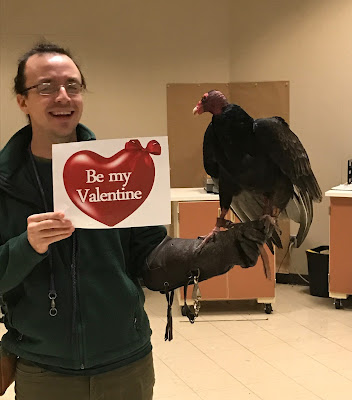 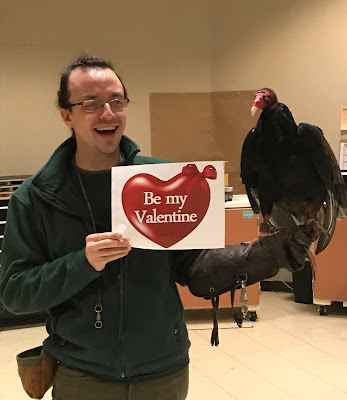 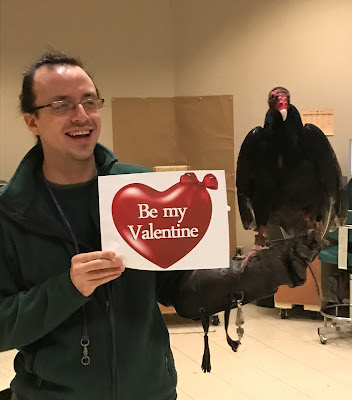 The Raptor Center recently made a new friend who impressed us so much with how beautifully he expressed his love of raptors.  Jonah, 13, agreed to share his journey so far in a guest blog post.  He is also a talented artist, as you can see from his drawings.

We thank Jonah and his family and friends for being a part of spreading the message how raptors are an important part of our shared world, and we look forward to another visit soon.

"Hello, my name is Jonah, and I am 13 years old. This is my first post for The Raptor Center blog. After sending The Raptor Center a Thanksgiving thank-you letter for caring for the sick, poisoned, injured and human-imprinted raptors, I was asked to write for this blog. Aside from having a deep love and respect for animals and nature and a fiery passion for their conservation and protection, I like reading and drawing.

So, it's February, which means romantic lovey-doveyness everywhere. Blech. The only kind of love I'm going to be talking about is how I first came to love raptors. I've always loved animals since I was a baby (literally!), but my love for raptors in particular, and owls in particular among raptors, did not begin until fairly recently- the late summer of 2016, to be exact. I love to read and some of my favorite stories are those with animals as main characters. Naturally, I eventually was introduced to a book series called Guardians of Ga'hoole by Kathryn Lasky. In case you have not heard of the series or read it, the stories are set in a world where humans no longer exist, and the main characters are owls, among other animals. The author incorporated a lot of real facts and information about owls into her writing and it got me curious to know more.

Next, what really sparked the flame of interest was our cabin trip in September when I heard my mom say, "Look! An owl!" but I missed it. From that moment on I had a goal to see owls in the wild; I spent the remainder of the cabin weekend listening for and looking for owls. I heard one in a tree nearby but was never able to see it. Later, a small bird that was probably a Saw-Whet owl swooped in front of our windshield in a blurry flash. Since then I have seen wild owls right in our neighborhood- probably the same nesting pair. I've seen them twice in December silhouetted in the dark, moonless distance after hearing them calling, and once (just today) in the daylight getting chased away by crows as I glanced up from writing this!

All the other raptors kinda got dragged along for the ride when my love for owls began and I have kept track of the species I have seen ever since. I'm probably not the only one who is kind of grossed out by all this February love madness, so I strongly suggest joining me in the love of raptors!"
Posted by The Raptor Center at 5:16 AM 7 comments: