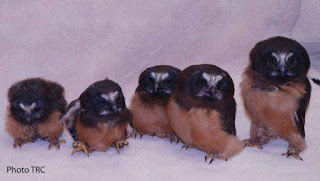 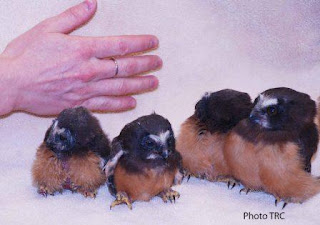 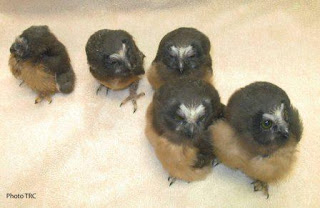 The Raptor Center had five unique patients last week! Five Northern Saw-whet owls were brought in. This species nests in tree cavities, and the nest tree was clear cut. The fledglings are not old enough yet to be flying on their own, so they will be raised and put through a slow release process called a "hack". There is a danger of the youngsters “imprinting” on humans in this early stage of their development, so The Raptor Center is careful to make sure there is minimal contact with humans.

As you can see, all five chicks are different sizes. Raptors are asynchronous hatchers; this means that incubation starts before the last egg in the clutch is laid. Because eggs are not laid all at once, this means that each chick will hatch on a different day or time, and they start growing and developing right away. A nest of five like this could mean that there is a difference of a week or so in age from the youngest to the oldest chicks.

Spring and summer are times when young birds of all raptor species are discovered as work on landscaping and tree cutting is done. Please make sure that as you plan these activities, you check for any signs of a tree be 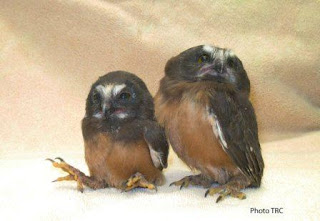 ing used for a nest. It is also a good reminder that if you find youngsters, please call The Raptor Center at (612) 624-4745. It is illegal to keep them as pets or to care for them unless you have the proper permits. For more information, please check our web page on How to Help an Injured Raptor.

These youngsters, and many others, are helped each year by The Raptor Center. This past spring alone, we assisted 31 Great Horned Owl chicks who needed help. Someone responds in each of these situations to examine the chick for injuries and then arrange transport and suitable nest relocation, all of which takes much time and money. Would you consider donating to The Raptor Center to help us continue our work?


Posted by The Raptor Center at 6:39 AM No comments:

Another Bald Eagle Helps with Research 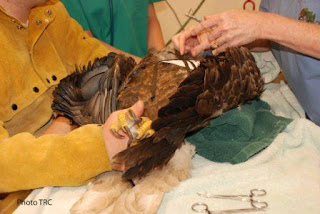 The Raptor Center assisted with more eagle research last week. Over the past three years, USDA Wildlife Services, in partnership with USFWS, Audubon Minnesota and The Raptor Center, has put GPS transmitters on several bald eagles as part of a study looking at eagle activity around a local airport. Just this past week, Wildlife Service biologists were able to trap two bald eagles, one juvenile and one adult. Both eagles were examined at The Raptor Center and fitted with satellite transmitters. Blood and feather samples were also taken to evaluate for contaminants such as lead and mercury.

As part of the study, the juvenile bird was trans-located from the airport site to a more northern location in an effort to reduce risk of air strikes, a major public safety concern. Two previous juveniles have been successfully trans-located in the past couple of years, spending the summers in the north woods area and moving south during the winter. The adult eagle was not trans-located due to breeding season, but the data from the transmitter will help us learn how eagles use the airspace in that area.

The USDA has generously provided TRC blog readers with information on one recently trapped bird, (known as Eagle 70). 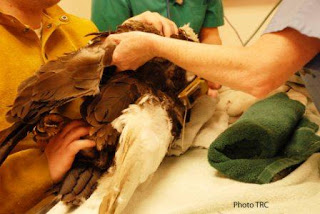 The photos in this posting show the transmitter being placed on the bird by Dr. Julia Ponder while it is safely anesthetized. As the photos from Golden Eagle 42 show in earlier postings, the transmitter is fitted like a backpack onto the bird, and checked to make sure it will not impede flight or otherwise affect the bird’s activities. Identifying bands were placed on the bird’s legs. The project, or color, band is green 02/M. 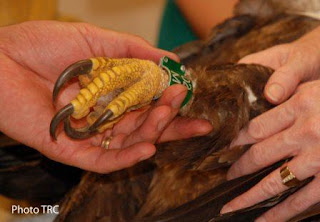 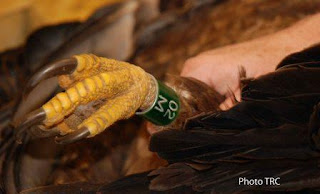 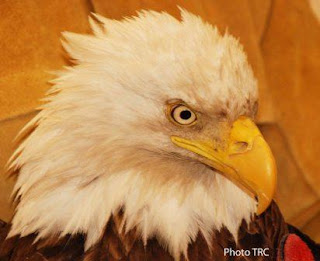 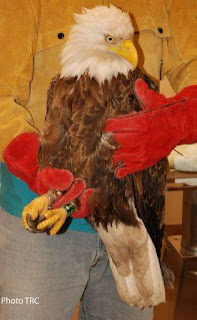 Posted by The Raptor Center at 10:06 AM No comments: 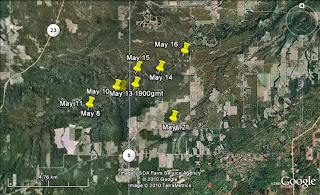 Harley is still moving around the same general area he has been using the past few weeks in Carleton and Douglas counties. He seems to be moving a bit further afield than he was last time we checked in on him. Note that he is still not covering a lot of ground; the distance between May 11 and May 16 is only 4 miles.

Posted by The Raptor Center at 5:01 AM No comments: 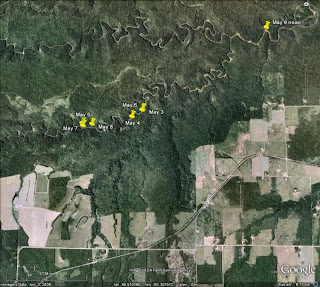 Harley continues to hang tight in a pretty small area. This area is about 30 miles N/NE of his approximate recovery area. The roost locations are all within .8 mile of each other on the south fork of the Nemadji River in Carlton Co., MN. One of the attached photos shows what is probably a hunting area on the river in Wis. 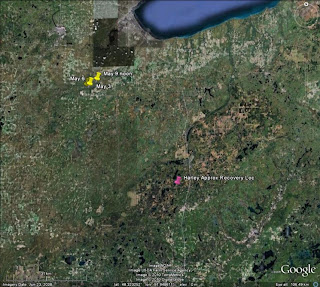 Posted by The Raptor Center at 11:10 AM No comments:

At the May 6 Twins/Orioles game in Minneapolis, an American Kestrel stole the show! The bird has been spotted at several games, and has been reported to The Raptor Center's Kestrel Watch. He caught a moth, and proceeded to eat it in front of the crowed! It made the news, too! Here is a link to an article, and it actually made ESPN's Top Plays the next day! Here is some fan-produced video of the bird and his catch - 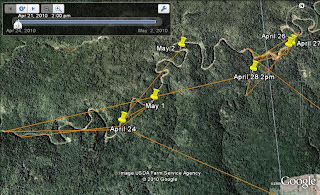 Harley seems to be settling in a bit the last week or so. The attached map shows his evening roosts and the lines are his movements during the day. This view is about 2 miles across so he is not straying very far.

Posted by The Raptor Center at 7:52 AM No comments: