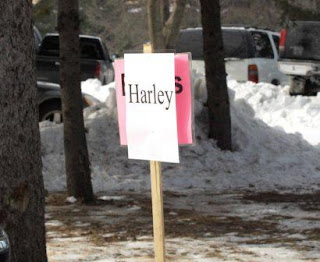 The day finally arrived! After Harley's successful rehabilitation and final check, as well as placing his satellite transmitter on, he was ready to go!

Carpenter Nature Center in Hastings, MN is a great place for releasing rehabilitated eagles. It is on the Mississippi River, where many congregate in the winter months.

A quick thinking staff member made sure to reserve a parking spot for Harley (or at least the Raptor Center staff who brought him!) 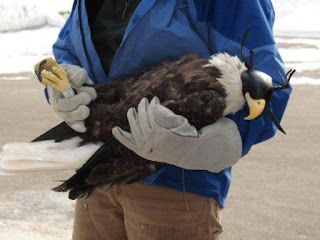 To transport Harley, he was carefully carried by Gail Buhl, Education Program Manager of The Raptor Center. Note the leather hood that covers Harley's eyes, so the stress of so many people and new things is cut down tremendously. 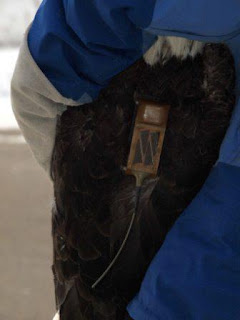 Gail shows the transmitter on Harley's back that we hope will teach us some things about how Harley fares after his treatment, as well as bald eagle biology. 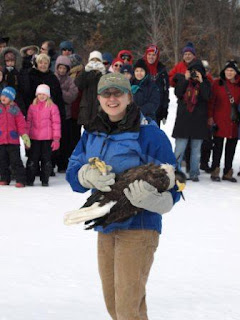 Harley had many fans who came out to wish him well! 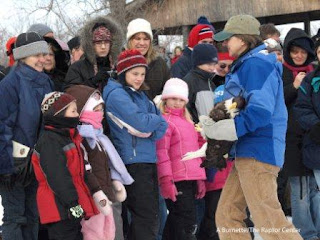 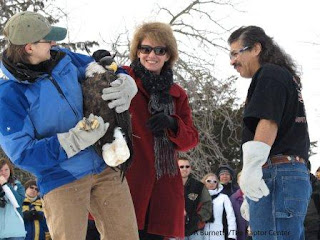 Gail, Dr. Julia Ponder, Executive Director of The Raptor Center, and Brian Baladez, the person who found Harley when he was injured. 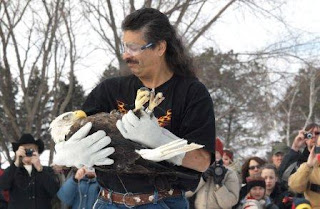 Brian would release Harley back into the wild. He took a moment to look at the bird he gave a ride to those months ago. 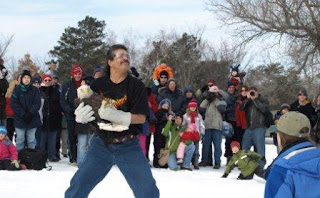 Brian gets ready to give Harley his freedom - 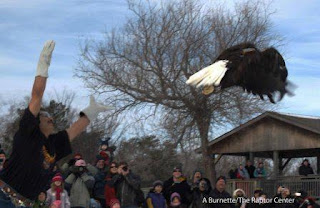 And off he goes! 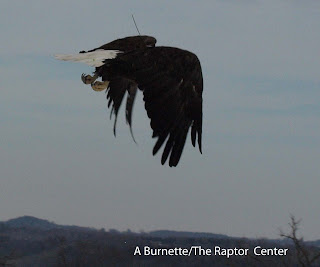 You can see the transmitter on Harley's back as he flies away. Please keep checking back on the blog as we get information from the transmitter. We can track how Harley does!
Posted by The Raptor Center at 2:06 PM 2 comments:

Today, Harley received his pre-release check, as well as being fitted with a GPS/satellite transmitter. As part of his pre-release exam, he was radiographed (his wing is well healed!), had a blood sample taken and received a permanent USFWS identification band around his left ankle.

The first photo shows the transmitter that will be used to send us information on where he is! The transmitter is fitted like a backpack on the bird - he will be able to fly comfortably with it. It weighs only 70 grams. Harley the bird weighs over 4200 grams, so this is a very small addition of weight. 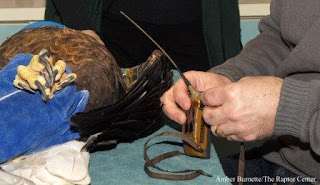 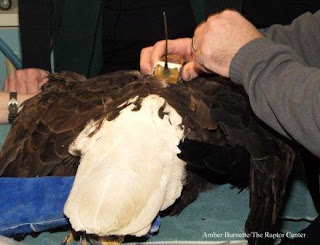 The backpack has to fit exactly right, so Harley will not be bothered by it. 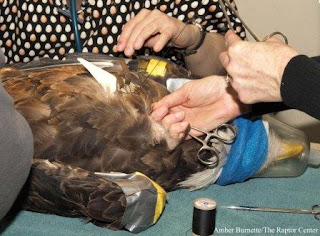 An average life-span of the transmitter is three years, though they have been known to last as long as five. There is a solar-powered battery on the unit. The unit is attached to Harley with teflon tape straps. Over time, the thread used to stitch the straps together will rot, and the backpack may just fall off. 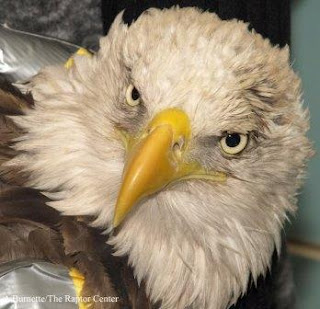 Harley is ready to go!

Posted by The Raptor Center at 9:28 AM No comments: 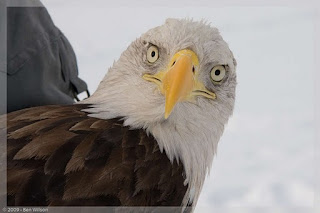 Harley is Soon to Fly Free - You're Invited to Watch the Release!

In early August on a long stretch of County Highway T near Wascott, Wisconsin, motorcyclist Brian Baladez passed a bald eagle on the side of the road. Realizing the bird was injured, Baladez wrapped it in his leather jacket, strapped it to the back of his Harley Davidson motorcycle and transported it to the Duluth Zoo to find help. One vet and police car ride later, Brian and eagle were referred to our clinic.

Here at The Raptor Center, Dr. Irene Bueno-Padilla, a Veterinary Intern from Spain, lead the case diagnosing the eagle with a fractured ulna (wing) and lead poisoning. The lead poisoning is most likely the result of consuming prey shot with lead bullets. In addition, readers of the Duluth News Tribune named him “Harley” in reference to his unorthodox rescue vehicle after his story was published. To repair his broken wing, Harley underwent surgery performed by Dr. Julia Ponder. Harley’s flight rehabilitation was delayed due to intense molting of his flight feathers. According to Dr. Ponder, this is a common problem associated with wing injuries.

With the help of numerous volunteers, Harley took flight in mid-December and has been exercised regularly since then. Now that our staff is confident that Harley will be able to survive on his own in the wild, he will be released at Carpenter St. Croix Valley Nature Center near Hastings. From there, it is likely that Harley will go north to find a mate. Wherever he goes, Harley can now take to the skies and fly free.

After Harley’s release on January 30th, 2010, we will track his location through a GPS/satellite transmitter. Tracking his location will help us learn more about how eagles adjust to the wild after being in captivity. In addition, Harley's data will contribute to our knowledge base about the movements of bald eagles.

Join us Carpenter Nature Center at noon on Saturday, January 30th to watch Harley be released! 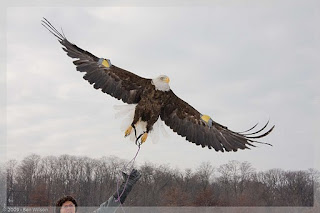