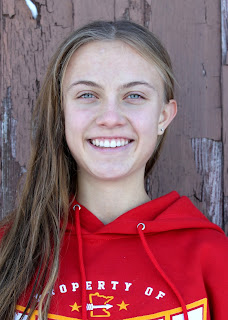 Erika S. is a lobby assistant volunteer for TRC.  Her love of all birds started as a young girl.  Several years ago she started raising poultry and now lives on a hobby farm with twenty-seven chickens.

While she is kept busy greeting the public, coordinating their tours at TRC and many other duties, Erika also finds time to sketch some of the education winged ambassadors.  She agreed to be a guest blogger for us so she could share her story and her sketches.  We thank Erika for her generous gift of time to volunteer, and we could not be more proud of this next generation of teachers and conservationists.

"One year for my birthday, my mom took me on a raptor-themed trip to The Raptor Center, the National Eagle Center, and a birding outing via kayak on the Mississippi River in Wabasha. I enjoyed watching and learning about the raptors I saw while on my trip. I never would have guessed I would be volunteering at The Raptor Center just two years later! 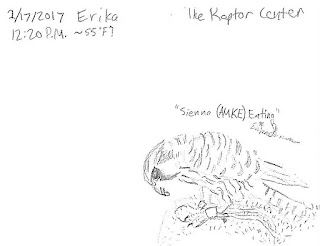 Last fall, I started volunteering at The Raptor Center, and I have loved every day of it! The staff and other volunteers have taught me a great deal about raptors, and I like showing the items in the biofact cart to visiting kids. Each week I volunteer, I bring my sketchbook in case I get the chance to draw some of the beautiful raptors. Although I usually drew horses when younger, I have recently started drawing more birds—mainly raptors. I love sketching raptors because it gives me a better sense of their feather patterns, shapes, and other details that I wouldn’t usually notice.

I still love all birds, but I am most fascinated with raptors—especially American kestrels. I have recently seen a pair of kestrels near my house and would like to build a kestrel nesting box before next spring. I am also planning to take Cornell University’s online ornithology course next year and later major in biology in college. Someday, I would love to have a job working with raptors and teaching children and adults about the importance of raptors in the ecosystem—just like The Raptor Center does." 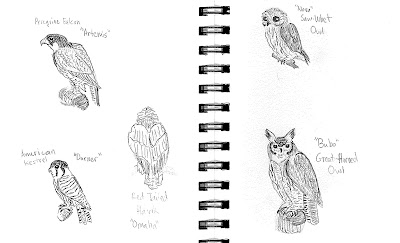 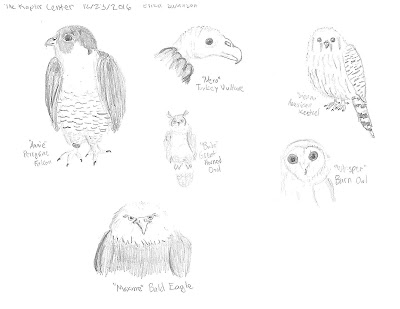 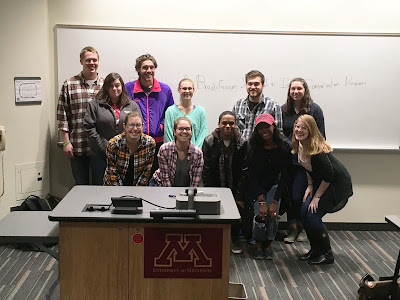 Recently, students were given an assignment to gather information and then come together to debate the use of brodifacum, a rodenticide, in conservation efforts.

This topic is based on conservation efforts that The Raptor Center has been involved with in the Galapagos Islands.  This work is referenced in an article in the publication Nature.

Posted by The Raptor Center at 8:43 AM No comments: 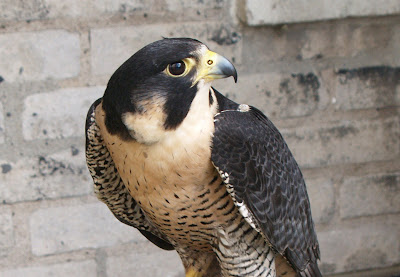 We wanted to let you all know that Annie, one of our education peregrine falcons, was euthanized recently.  As you know, the staff at TRC want to ensure our education birds have a life of quality and we work hard to achieve this. Over the last several months, we have actively changed Annie’s management and worked very closely with the clinic staff to make sure she continued to be comfortable. Despite our efforts, Annie’s condition deteriorated and we recognize that it was time to give her the gift of a humane and gentle end.
Annie’s history is fascinating and highlights the incredible and long-standing involvement in the restoration of the peregrine falcon in the Midwest by TRC and the University of Minnesota. By 1962, peregrine falcons were extirpated from most of North America, especially east of the Rocky Mountains.  Why did this happen? Mostly because of the widespread use of the chemical DDT (dichlorodiphenyltrichloroethane), a chemical insecticide.  DDT breaks down into DDE, and is very persistent in the environment.  Found in the thinned eggshells of peregrine falcons, DDE was one of the main reasons for their dramatic population decline.  By 1972, DDT was banned for most uses in the U.S.
In 1973, the Endangered Species Act (ESA) was passed in the U.S.  Animals and plants that are in dire peril of extinction are "listed" by recommendation or petition.  The USFWS and NOAA are the two federal agencies that administer the ESA.  The peregrine falcon was a "founding member" of the Endangered Species Conservation Act in 1970 and listed again in 1973 on the ESA.

Many projects to increase peregrine numbers across the U.S. were underway already, most notably at the Peregrine Fund in Idaho. Dr. Harrison “Bud” Tordoff, Bell Museum of Natural History and Department of Ecology, Evolution and Behavior, and TRC’s own Director Emeritus, Dr. Pat Redig, started a project here in 1982 for Minnesota and the Midwest populations of peregrine falcons. In Minnesota from 1982-1989, 178 young peregrine falcons were hacked. Since peregrines do not make their own nests, or scrapes,  nest boxes were placed in strategic areas. The most successful areas, and the most controversial, were the nest boxes placed on buildings, smokestacks, and bridges. After those territories were at capacity, peregrines started moving back to the traditional cliff areas.
Peregrine falcons came OFF the federal Endangered Species List in 1999.
Annie was part of the peregrine falcon restoration project here in the Midwest. She hatched in mid-May 1995. She was a wild-produced bird. Her parents were Lindee (male) and Comet (female).  She fledged as “Cindy” (project band number black over red M/*H) with her two brothers off the Montgomery Ward Tower (since been demolished) in St. Paul, MN. After she fledged, Annie made her way down to University City, Missouri where she was injured and recovered on July 29th.  She was brought to TRC for treatment. Her wing injuries healed and Dr. Pat Redig and his son, Jeff, both falconers, flew her to prepare her for release. During this time, it was discovered that she was developing a cataract in her left eye. This rendered her non-releasable and she joined the Education team in 1996.
Peregrine falcons are an amazing success story that took effort by many people around the country. The Raptor Center made a huge impact on the success of peregrine falcons here in the Midwest. Annie is a part of this story and a part of the legacy that when people work together for positive change we can do it.
Posted by The Raptor Center at 10:01 AM 4 comments: