In Minnesota, barred owls nest a little later in the year than great horned owls.  They typically are cavity nesters that start searching for a good location to lay eggs in early to mid-March.  Most often, they choose a natural nest site such as a tree snag or hollow created by broken tree branches.  However, when out scouting for a suitable cavity, some investigate uncapped chimneys only to find that these “cavities” are  deeper than they appear and once the owls get in, they cannot fly vertically to get out.

Recently, a member of the public called TRC to report that a barred owl was indeed stuck in one of the chimneys of their house.  A TRC volunteer, who is also an arborist by trade, lowered a basket down the chimney.  After multiple attempts and significant prodding, the owl grabbed on to the basket (more than likely in defense) and the basket was quickly raised.  The owl was then transported to The Raptor Center’s clinic and treated for corneal abrasions.

A few days later, TRC received another call from the same homeowner saying that they thought another owl was in their second chimney!  Sure enough, the first owl’s mate investigated the second chimney and got stuck.  Two TRC volunteers responded to the call, this time rescuing the bird from inside the fireplace.  It also had abrasions on its corneas and a few broken flight feathers as well.
After 10 days of treatment, both birds were returned to their home territory and flew off together, reunited once again.

Many species of wildlife nest in natural cavities.  With the increase in human development occurring in their home territories, many species look for alternative cavities   Please make sure that your chimneys have proper caps; this will prevent situations like these barred owls faced from happening in the future.   This one act can have a great impact on the wildlife sharing your outdoor living space. 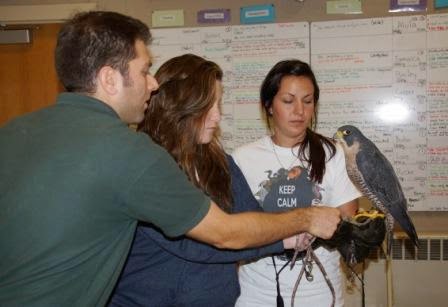 Registration is open for our Care and Management of Captive Raptors Workshop.  This four-day intensive workshop will orient both the novice and expert bird manager to the finer points of caring for and maintaining captive raptors for educational purposes.

Highlights include:
Hands-on learning with our expert staff in our internationally renowned clinic
Work with live education raptors and the staff of our education department
Meet clinic veterinarians, including Dr. Julia Ponder and Dr. Patrick Redig
Work with Lori Arent, author of Raptors in Captivity
Posted by The Raptor Center at 10:28 AM No comments:

If you are one of the thousands who are watching the bald eagle family on the MNDNR's eagle cam, we have some new information to share with you!  The female was a patient of TRC's in 2010.  We know this because she was banded upon release.   Read the press release from the MNDNR here. The text is also in this post:


A bald eagle that has had thousands of people across the country glued to their computer screens for the past couple months may well be the natural world’s equivalent of a comeback kid, according to officials with the Minnesota Department of Natural Resources and The Raptor Center.
DNR nongame wildlife biologists recently were able to get a good look at a leg band on one of the adult eagles nesting beneath its eagle camera in the Twin Cities. The numbers on the band identified it as a bird that was found along the Minnesota River in Burnsville and brought to The Raptor Center in St. Paul in October 2010.

Unable to fly or even stand, the adult female had an abscess in her right foot and had a large number of intestinal parasites. Staff at The Raptor Center removed the abscess and treated the bird for its other ailments, then released it at the Minnesota Valley National Wildlife Refuge in Bloomington about a month later.

In February, the female bald eagle laid three eggs, which have subsequently hatched, in a nest watched by a DNR video camera that streams live footage over the Internet. Since then, more than 272,000 people from all 50 states and 145 countries have been following the family’s daily feedings and other activities. DNR biologists believe the adult bald eagles are the same pair that in 2013 laid three eggs in early January, only to have them freeze.

“While this is just one of thousands of birds treated at The Raptor Center, it’s exciting that it’s gone on to become such an educational celebrity on DNR’s eagle cam,” said Dr. Julia Ponder, The Raptor Center’s executive director. “Because the bird was banded, we’re able to learn what became of it, and how the care she received here allowed her to go on and become a reproductive member of the species.”
Part of the University of Minnesota’s College of Veterinary Medicine, The Raptor Center rehabilitates more than 800 sick and injured birds each year, while helping to identify emerging environmental issues related to raptor health and populations. It also provides training on raptor medicine and conservation for veterinary students and veterinarians from around the world. This year is the Center’s 40th anniversary, and on Thursday, April 24, it will be breaking ground for updated facilities.


The Raptor Center routinely bands rehabilitated birds in an effort to collect information about topics such as migration and dispersal, determining life span, and toxicology and disease research.  In this case, we were pleased to discover that our clinical work reached its ultimate goal:  to give each patient another chance at becoming a productive member of its population.

As with most of TRC’s raptor patients, an incredible amount of teamwork went into the rescue and care of this eagle in 2010. In addition to the clinical services provided , it took several of our dedicated volunteers to transport the bird to and from our clinic; gracious permission of the Minnesota Valley National Wildlife Refuge in Bloomington to allow us to release the bird at that safe location, and TRC staff to coordinate all of the details for rescue, treatment, and release.