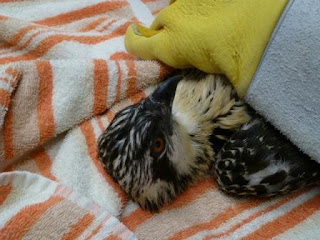 In mid July, as an annual collaborative effort between the Natural Resource Departments in Wisconsin and Iowa, seven osprey nestlings (6-7 weeks old) were removed from nests in northern WI to be reintroduced into Iowa. Since 1997, this reintroduction effort has worked to repopulate osprey whose population decline began in the 1950’s due to egg shell thinning caused by the use of the pesticide, DDT. 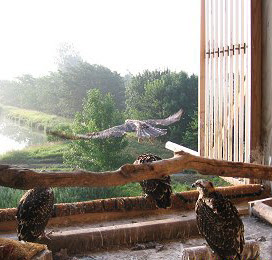 En route to their new home, the chicks made a “pit stop” at TRC for a quick exam and refueling (a fish dinner). Once at their final destination, they were placed in a slow release enclosure and will be fed a fish meal daily for approximately 2 weeks. Then the enclosure door will be opened and the youngsters will be free to come and go for a meal as needed. Over several weeks, they will depend less and less on the free fish handouts and more on their strength and hunting savvy to satiate their appetites. The ultimate goal is that some of the youngsters, who bind to their home territory, will return after migration and choose suitable habitat for breeding in Iowa. (The second photo is from the SOAR website, and an example of a slow release enclosure). 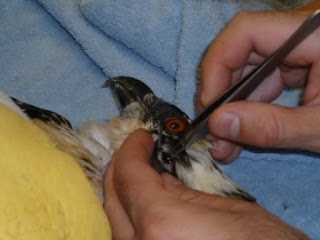 TRC clinicians examined the chicks to make sure they were healthy; no fractures, bruising, soft tissue injuries, eye injuries, or external parasites. The majority of the birds did harbor maggots in their ears, a typical condition of nestling hawks. So, the maggots were manually removed with forceps, the ears cleaned, and an anti-parasitic drug given just to make sure no other parasites were missed. The birds were then given an injection of fluids under the skin in their upper leg so they wouldn’t get dehydrated and were fed a fish meal to tide them over as their journey south continued. 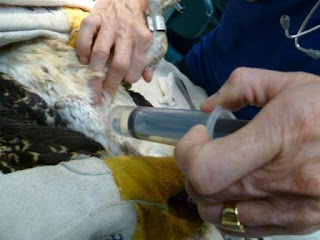 Posted by The Raptor Center at 6:42 AM No comments: 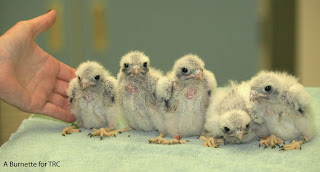 The nesting season has been challenging for many raptor species in Minnesota. A cool wet spring followed by storms blasting winds of fury left many raptor babies without nests and separated from their parents. Five little “fluff balls” also had a challenging start to life but not because of storms; their parents chose to nest inside of a barn in Wabasha and soon after the young hatched both parents were found dead, suspected of ingesting an unidentified toxin. Due to their food begging cries, the youngsters were quickly discovered and transported to TRC. At ages estimated to be only 3-6 days, the downy chicks were identified a 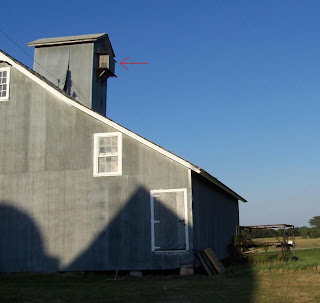 s American kestrels. They were different ages because in several species of raptors, the eggs are incubated after the second one is laid even though more will be laid in the next few days; thus, they hatch a few days apart. For the next week and a half, these falcons were housed in an incubator which provided them with the warmth their mom would usually provide, and they were eating on their own within a few days. Great care was taken so they would not imprint on people, but on each other instead. They started eating a mash of skinned mice, chick, and quail run through a food processer and seasoned with extra calcium. After that they quickly moved to cut up meat and eventually to a whole prey diet. Last week, when they reached fledging age (about 3.5-4 weeks) they were transferred to a hack enclosure north of the Twin Cities metro area.

A “hack” is the process of a slow release. The birds were fed in the enclosure for 6 days and the door was opened on July 10. They are now free to come and go and will do so for several weeks as they refine their flying and hunting skills. Food will be left for them daily until they are self sufficient and no longer need our support. During this time another group of 3 youngsters grabbed by a dog will be following in their “talon” steps and joining them at the hack site. (In the second photo, the arrow indicates the hack enclosure that the kestrels utilized in their transition back into the wild.)

The Raptor Center couldn’t do this important work without the help of our volunteers, and the support of friends like you. While you are checking out our Kestrel Watch site, you can also make an online gift (click here) to ensure a future for these youngsters.
Posted by The Raptor Center at 9:03 AM No comments: 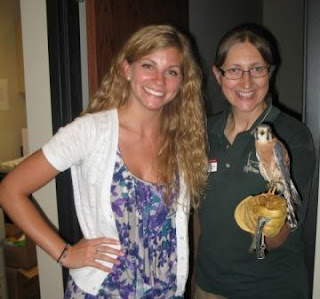 This week Gail Buhl, TRC's Education Program Manager, and Baron the American kestrel, went to Radio Disney! They met with DJ Kari Jo Johnson, and talked about Kestrel Watch (TRC's citizen science initiative), American kestrel natural history, and how important it is to help these small falcons out with housing choices by keeping dead trees available for a nest cavity. Gail also mentioned TRC's upcoming events---appearances at the Minnesota State Fair, Renaissance Festival, and our Fall Raptor Release. Check out website for dates and details!
Posted by The Raptor Center at 7:50 AM No comments:

Harley Back in the USA 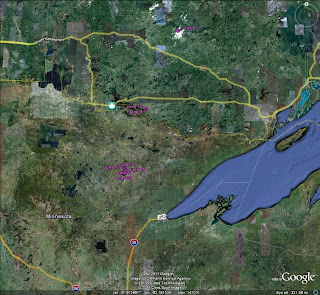 After taking a bit of a vacation in Canada in late May and early June, Harley decided to return to the U.S. via the Boundary Waters. We last had him in Ontario on June 8. On the 9th of June he moved about 105 miles south, spent a couple of days near the U.S. – Canada border then moved another 77 miles sou 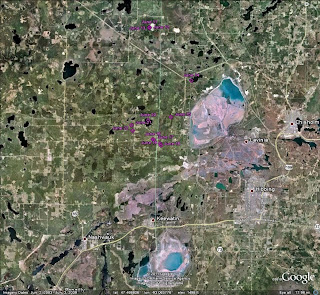 th to the Iron Range of Minnesota on the 11th. Since then he has spent his time north of Hibbing and Chisholm, moving around but not outside of an area about 8 miles in length.

Posted by The Raptor Center at 4:38 AM No comments: