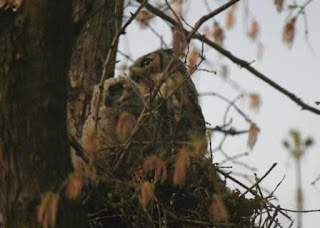 Dr Ponder has a family of great horned owls near her home. There are two chicks that have been visible. In Minnesota, great horned owl chicks are the first raptors to breed in the calendar year. This means that in cold, snowy February and March, the owls are sitting on eggs and able to keep them warm.

These photos show the female sitting with one chick, who is about five to six weeks old, and then one of the chicks who has left the nest at about seven weeks old. Great horned owls do not make their own nests, so the nest that is being used was either a crow or squirrel nest. Note the absence of a sturdy stick nest, which is what hawks and eagles will construct for themselves.

The young owls will first become “branchers” – they will make their way from the nest to a nearby branch in a tree. They will use their beaks and flap to keep their balance as they move about the branches. They are about 13 weeks old before they have feathers that can sustain real flight, but will be quite active before then.

It is important to note that this is the time of year when storms or winds might blow young owlets from their tree branches, and sometimes the young are found on the ground. The parents are aware that they are there – the youngsters will still vocalize for food – and so in most cases nothing needs to be done from the human side providing that there are no cats/dogs or people to bother or harm them. The Raptor Center welcomes local calls so they can ascertain if medical attention is needed, but most times the young will make their way back up into trees before long. 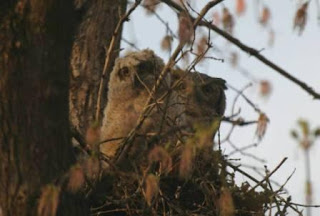 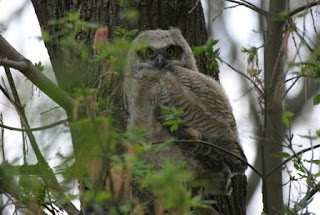 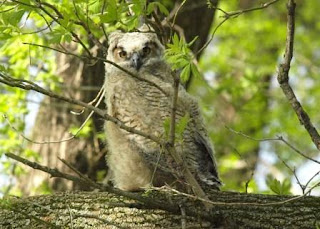 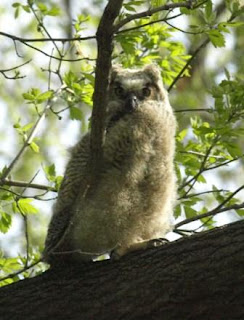 Posted by The Raptor Center at 4:27 AM No comments: 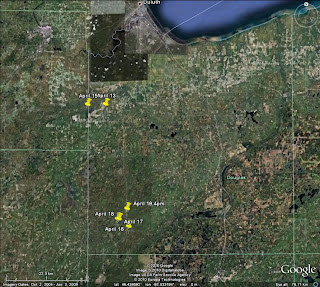 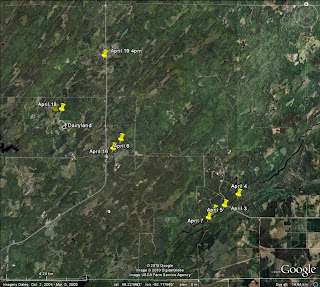 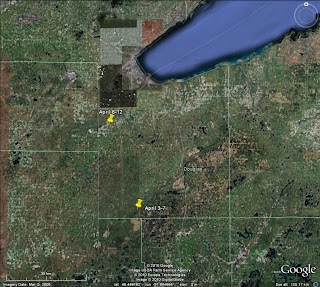 Harley remains in Douglas County Wisconsin and has focused his attention on 2 areas. Between April 3-7 he was in the southern part of the county. On April 8 he moved up to the northwest part of the county less than 3 miles from the Minnesota border, where his most recent signal originated on April 12. Almost all of his signals during that time came from a very localized area. There was no movement from 8pm 4/11 – 6pm 4/12 (the last signal we received to date). 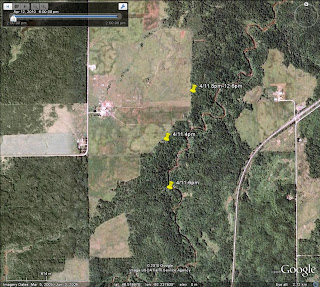 Posted by The Raptor Center at 5:17 AM No comments: 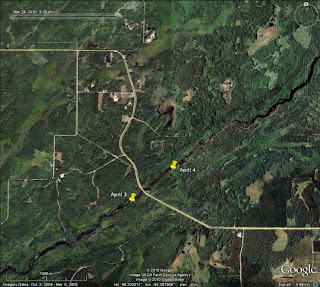 The data from Harley's transmitter will be sent in to TRC about once a week through the fall.

Harley moved slightly south and then west of his location north of the Twin Cities on March 28 to St. Croix and Polk counties Wisconsin (about 10 miles west the St. Croix River). On April 2 he took off and moved about 40 miles north to Crex Meadows Wildlife Area in Burnett County. On April 3 he moved another 40 miles to the NW into Douglas County, WI. Our last signals on April 4 found him in that general location.

The following three maps show (in order, from first to last in the blog posting): April 3 and 4th roost locations, where he was in the last week, and where he has gone since he was released. 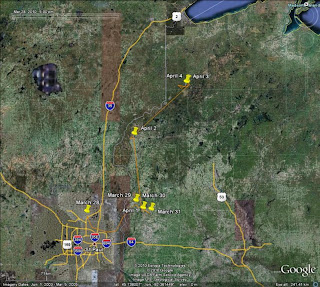 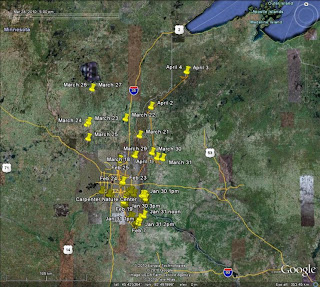 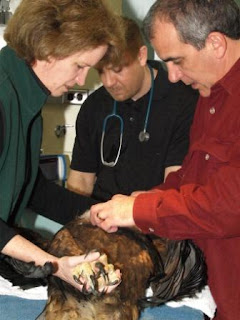 Dr. Julia Ponder, Executive Director of TRC, and Mark Martell, Director of Bird Conservation for Audubon, Minnesota, fitted the Golden Eagle with a satellite transmitter. The transmitter resembles a small back pack and is very lightweight – just a few ounces. TRC clinic staff anesthetized the bird before the transmitter was attached. This was to reduce the bird's stress during the procedure and to make it easier to properly fit the transmitter so it would not interfere with the bird's ability to fly or eat. The transmitter has a solar-powered battery that will upload data to let us know the location of the bird as it moves. We hope, like in the case of Golden Eagle 42, this will tell us more about range, habitat needs and other aspects of eagle natural biology. 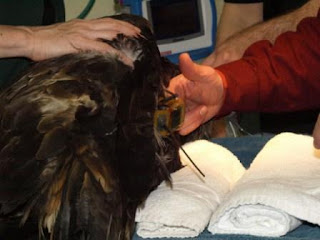 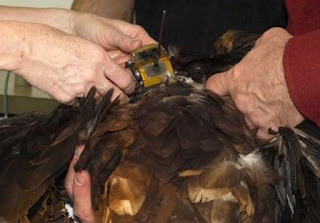 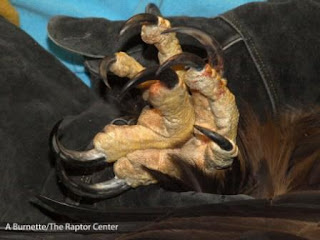 This bird had very large feet! A person wearing heavy welder’s gloves is holding the lower legs to safely restrain the bird. 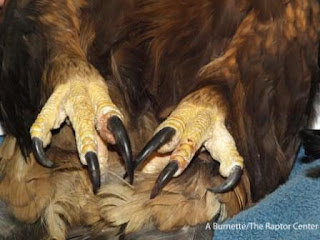 You can also see one of the differences between a Golden and a Bald Eagle - the Golden has feathers that go down to the tops of its feet. 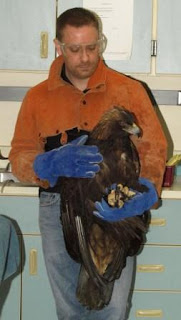 Drew Bickford, a Veterinary Technician at TRC, helped recover the eagle from the anesthesia. 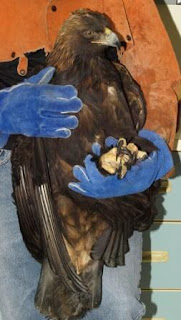