Update on The Raptor Center's Construction Progress; We Are Getting There!


Things are starting to happen quickly at TRC!  After a winter of Graham Construction working hard  building our education and rehabilitation bird holding areas, they are now very close to having them ready for the birds to return.

Our carpentry volunteer, David S., and clinic volunteers Tom T. and Kevin C., worked together to install and fine-tune the perches for eagles in the large rehabilitation pen.  The timing could not be better for the space to be available to complement the high caseload of eagles recently, and increase our ability to move the birds along into the reconditioning stage of their rehabilitation.


Very soon our Education staff will begin acclimating our winged ambassador team into their new homes.  TRC staff is working with Graham to conduct final details.  We are planning to share stories and photos of the training that goes into ensuring the birds will be comfortable in their new surroundings.  We will continue to be open to the public throughout, so please plan to visit this summer.


We again want to thank the many donors and supporters who have made this new housing possible.  We also look forward to enhancing and expanding the educational opportunities in our new space, the Douglas Dayton Education Wing. This will allow us to create a true destination for the public to learn about raptors and the world we share.

We also want to thank the Graham crew - Matt, John, Jim and Dave especially – for all their work to make sure the enclosures are to the highest standards.   We will be proud to showcase our teaching and training with the new facilities.
Posted by The Raptor Center at 9:55 AM No comments:


The Raptor Center hosted several middle schools at our site recently.  The students engaged in several hands-on learning opportunities such as critical observation and sketching of raptor artifacts and some of our winged ambassadors, meeting our clinical interns and learning what it is like to do a physical exam of a raptor patient, and how bird banding can teach us links to birds and our shared environment.

These visits are part of an ongoing curriculum integration program to create opportunities for schoolchildren to deepen their engagement with environmental topics.  Rockford Middle School was the first to partner with The Raptor Center.  Over the past four years we have partnered together, instructors have shared the impacts these multiple-visits have had on their students.  Students learn critical scientific investigation skills presented as part of the integration program, as well as applications for real-world problem solving within environmental frameworks.  The Raptor Center has appeared at events that Rockford hosts for parents and community members to view and experience the events taking place at the school.

Rockford was also recently designated as a Department of Education Green Ribbon School.  Students and staff are devoted to reducing waste and lessening their environmental impact. Exploratory classes created a waste challenge.  Education about organics recycling among students and staff diverted 47 tons of organic waste from a landfill into compost.
Posted by The Raptor Center at 8:56 AM No comments: 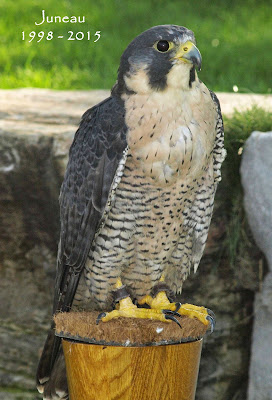 We wanted to share some sad news.  Juneau, one of TRC’s winged ambassador peregrines, was humanely euthanized recently.  She had begun to display some neurological signs, and very quickly her condition declined.  Her condition was complicated by pathological changes in her cardiovascular system, which were noticed during her diagnostic work-up.

Here are some statistics about Juneau. She was brought into the Education Department in 1998 during her first year.  She was 17 years old in 2015. To give you an idea of how much work Juneau did for TRC:

*She visited classrooms and events all over Minnesota, Wisconsin, Iowa, Nebraska, and North Dakota and as far away as Florida.

It is clear that her impact is not numbers alone. She was a living embodiment of efforts to save a species. She was part of a larger story of The Raptor Center’s (with many partners) successful efforts to restore the peregrine falcon in the Midwestern United States.  Juneau was instrumental in telling the story of the Endangered Species Act, banning DDT, and of people working together to ensure a future with intact and healthy ecosystems.

Her legacy is in the children that have seen her --- a real live peregrine falcon. Not in pictures, in books or on video, but living right in front of them.  You could see it in their eyes. In that moment the children understood how incredible it is that these animals exist. These children are the future that will ensure peregrines continue to fly free. They are the legacy of The Raptor Center’s mission: To ensure the health of raptors and the world we share through teaching, research and service.

Juneau, you will be missed, but your impact will not be forgotten.
Posted by The Raptor Center at 6:43 AM No comments: