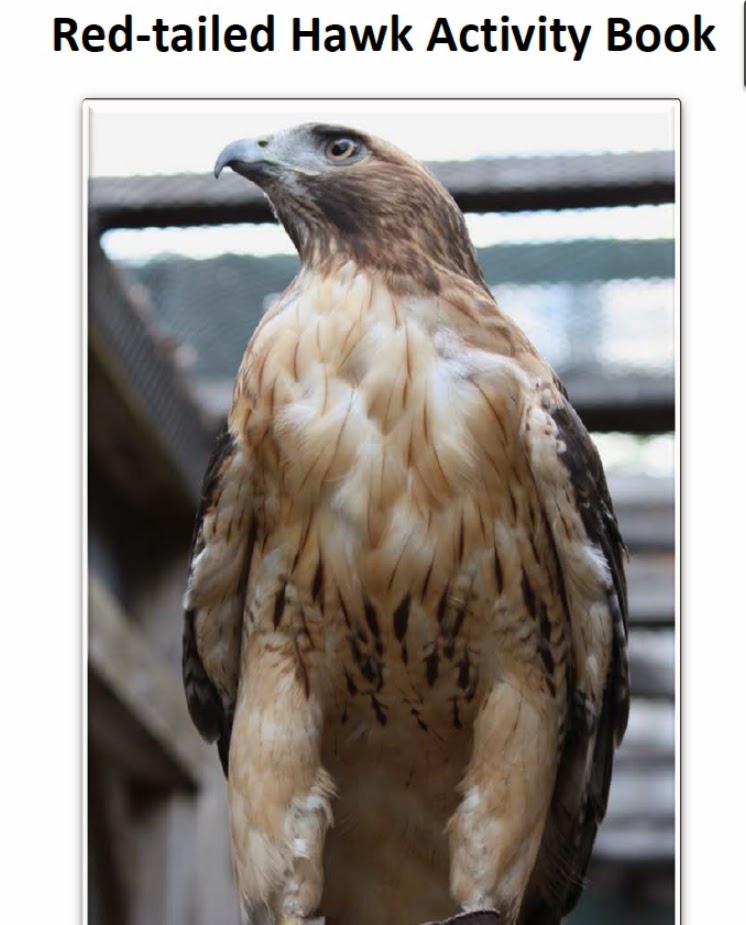 We have two new raptor activity books, available to download for free.  We have put together one on red-tailed hawks, and one on American kestrels.  They contain quick facts on the species, word finds, word scrambles, and other fun activities to learn about some of our favorite raptors.

Keep checking back on our Just for Fun webpage for more! 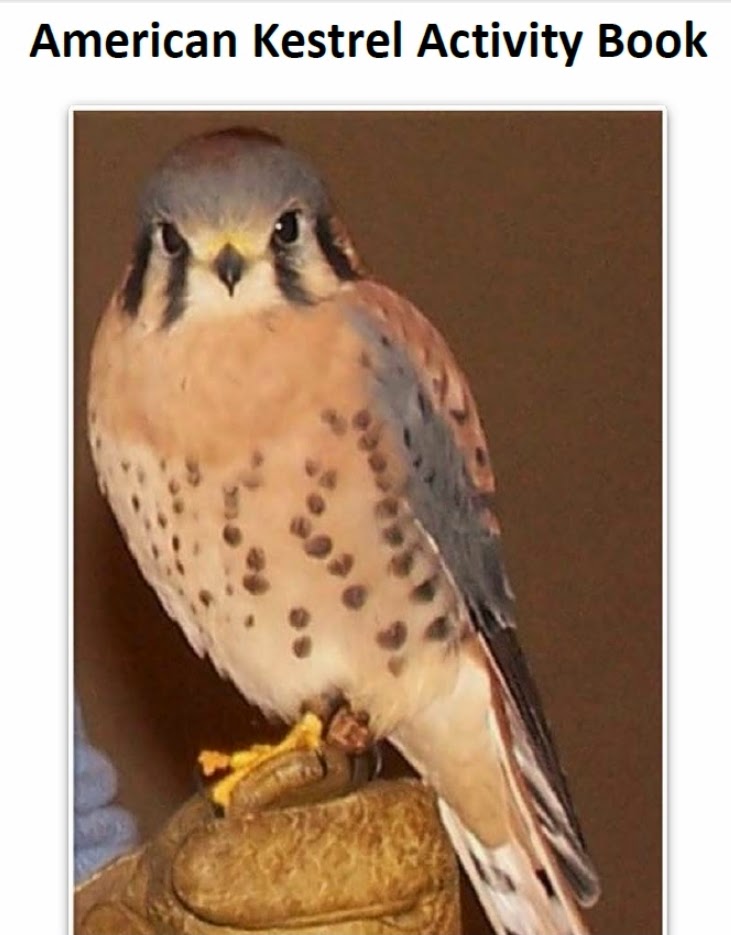 Posted by The Raptor Center at 7:27 AM No comments: 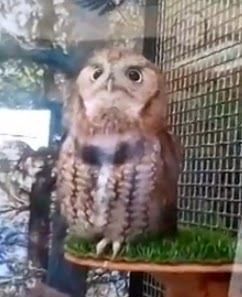 We wanted to share these clips of Mestaae vocalizing in his enclosure.  This species of owl is beginning to vocalize in courtship this time of year.
Posted by The Raptor Center at 10:47 AM No comments: 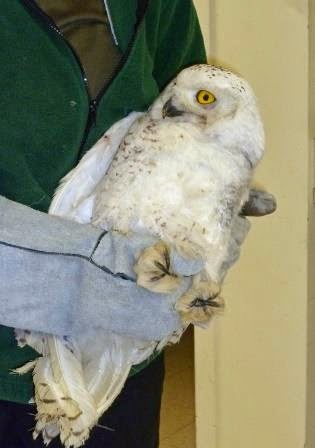 The snowy owl reportedly hit by a bus in Washington, D.C., in late January 2014 recently arrived to The Raptor Center at the University of Minnesota for care.

“A rehabilitation center on the East coast who had been caring for the owl reached out to us because of our international reputation for replacing damaged feathers,” said Julia Ponder, D.V.M., executive director of The Raptor Center. The Raptor Center rehabilitates more than 900 sick and injured raptors each year, while training veterinary students and veterinarians from around the world to become future leaders in raptor medicine and conservation.

The owl was in-clinic yesterday afternoon having damaged wing feathers replaced through a process known as imping. Since feather shafts are hollow, replacement feathers can be fitted, inserted and glued in by trained professionals, using a piece of bamboo as a connector between the bird and new feathers. Replacing the owl’s damaged feathers will allow the owl to once again fly with the maneuverability it needs for survival in the wild.

The Raptor Center clinic manager Lori Arent is a specialist in imping and performed the procedure. “We’re uncertain as to what caused the singed-like appearance to the owl’s feathers, but it does resemble patients we have treated who burned their flight feathers after flying over an intense heat source, such as a methane burner,” said Arent.

The prognosis for the snowy owl’s release is good. It will receive a test flight early next week and then an exercise program will be established to strengthen its muscles sufficiently for release.

Please keep watching our blog for more information on this patient.


Posted by The Raptor Center at 8:13 AM No comments:


We wanted to update you on the progress of the two bald eagles recently brought in from the Shakopee, MN area.  As you might remember, both birds have soft tissue damage from the territory dispute they were engaged in, resulting in their being found locked together on the ground.  However, the story that has emerged after they were brought in is that both were found positive for lead toxicity.

One of them was examined today.  He has been eating, and his wounds are being treated.  The lead in his blood is being addressed by chelation. This is a process where we administer a medication that binds to the lead and allows the animal to eliminate it from their system.

Every bald eagle admitted to TRC’s clinic has their blood tested for the presence of lead.  An average of over 30% of bald eagles we admit every year suffers from lead toxicity. The primary cause of lead toxicity in bald eagles is ingestion of bullet fragments (hunting ammunition) in a meal such as a deer carcass or gut pile.

The other eagle has a wound on the inside of its mouth, which was not a result of the battle with the other eagle.  It most likely was caused by a parasite, and treatment will continue. 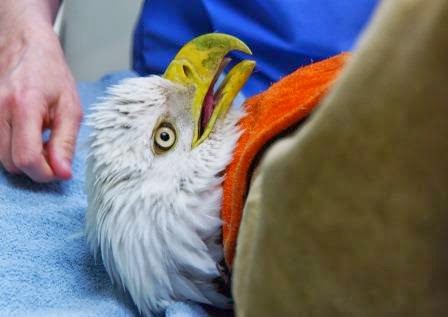 The length of the birds’ stay will be determined by the progress they make.

Our friends at KARE11 came out today to find out more information about the eagle patients.   Watch for a story soon!

TRC continues to educate the public on the impacts of lead in the environment.  For more information, you can go to our website.

Posted by The Raptor Center at 8:42 AM No comments:

Happy spring!  For many of us, a sure sign of spring is the return of peregrine falcons to their urban nest sites.  For states like Kentucky and Indiana, some of the birds are already incubating eggs.

For states like Nebraska, Minnesota, Illinois and Wisconsin, the birds are active in choosing mates and determining the "owner" of a given site.

Nest cams are ways that technology has allowed us to watch the inner lives of peregrines, including their challenges.

Links to some cameras (and we will certainly post more in the future!):
Kentucky: LG&E's Mill Creek Generating Station in southwest Jefferson County Peregrine Cam

The fascinating story of peregrine falcon restoration in the Midwest can be found on the Midwest Peregrine Society website.
Posted by The Raptor Center at 11:35 AM No comments: 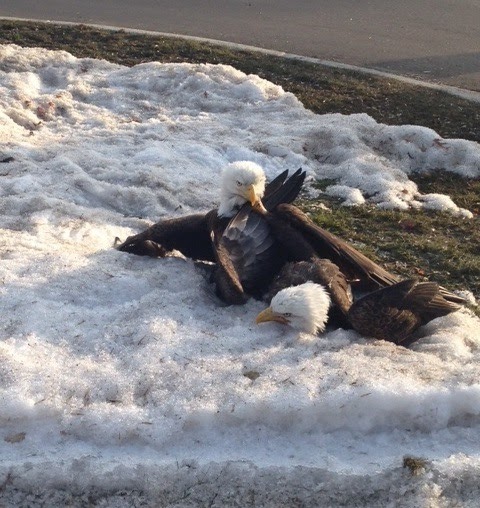 Monday evening, two adult bald eagles were transported to our clinic from the Shakopee, MN area.  They were found on the ground with talons locked together (as you can see from the photo submitted by Michelle Karr.)

These two adult males were most likely entangled in a territory dispute.  Both birds have had initial exams, and presented with a variety of soft tissue wounds.  They both also tested positive for low lead toxicity levels, which means that at some point they each ingested lead with their meals.  The most common cause of lead toxicity in eagles is spent lead hunting ammunition.  Lead poisoning has long been recognized to be a serious problem in bald eagles admitted to The Raptor Center.  (Click here for the story on our 40th raptor clinic patient - a bald eagle with lead poisoning.)

Many bald eagle pairs in Minnesota are incubating eggs at this time, but single adults might still make attempts to take over an already-occupied territory.

For the next couple of weeks, these birds will be treated for their soft tissue injuries and lead toxicity.
Posted by The Raptor Center at 1:36 PM 6 comments:

As you will see below, we have 79 patients in our clinic.  If you think that sounds high, you are right.  This time of year, an average census is about half that.  Why?  We have many patients that we are still overwintering.  Our flight crews have not been able to get out with the ice and snow conditions (with more snow on the way).  We also started at a very high number going into the winter with our record 914 patients admitted in 2013.

All of these hungry patients have increased our food bills. Would you consider a gift to help us feed these patients until the weather allows us to  safely send them on their way? 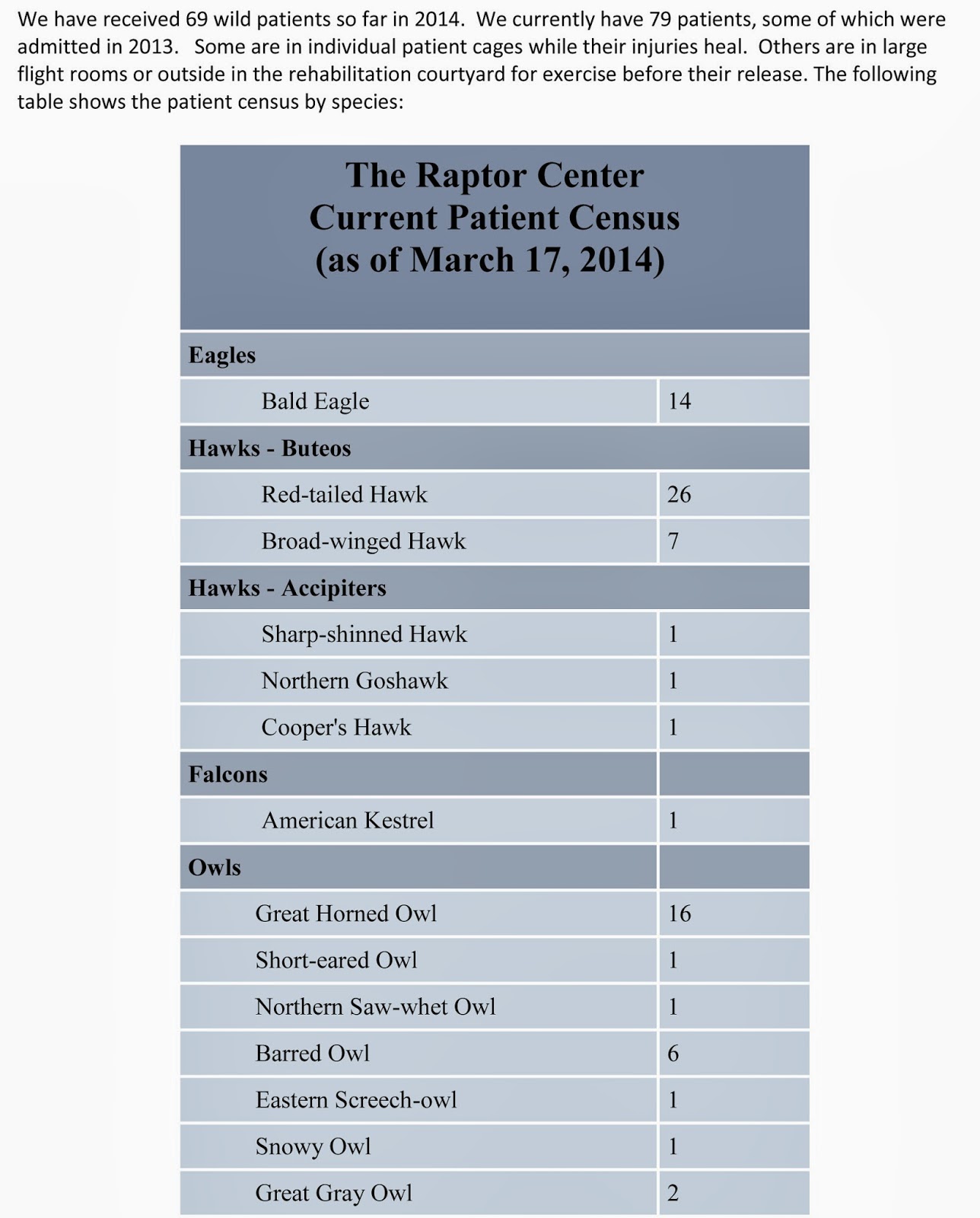 Posted by The Raptor Center at 5:45 AM No comments:

Help Birds by Being a Citizen Scientist

With the amount of daylight increasing, independent of weather, many of our feathered friends are starting their annual migration north to breeding grounds.  American robins, along with species like monarch butterflies, are tracked with maps made up of data from observations by YOU.  You can go to the Journey North website, with lots of resources to identify and learn as a family. 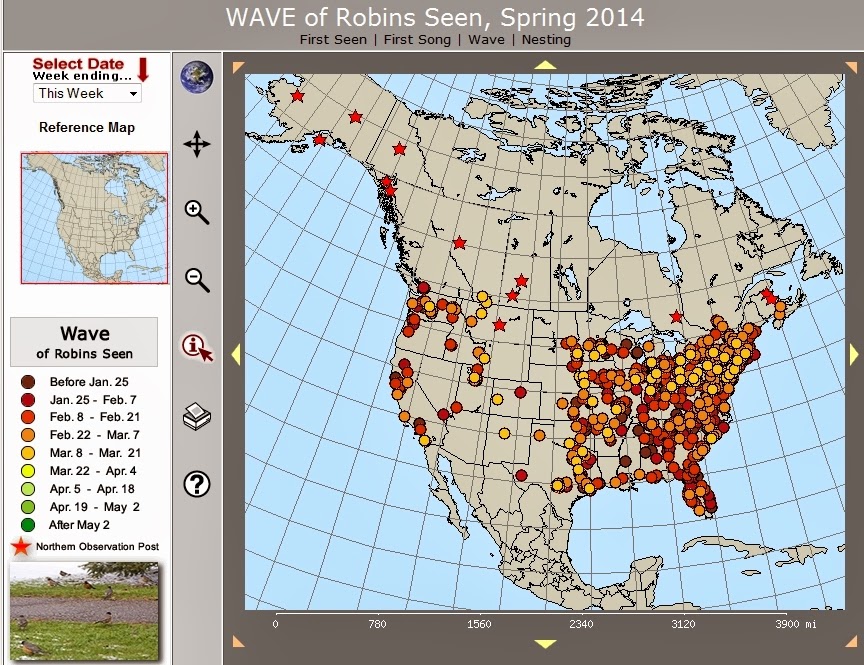 Posted by The Raptor Center at 7:44 AM No comments: 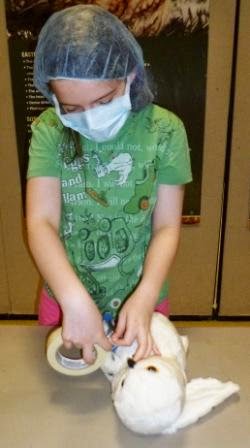 With the warmer temperatures, it is easier to think about summer!
The Raptor Center has several summer camps for ages 6-15, from June - August.

Raptor Vet lets you learn about life as a wildlife veterinarian at The Raptor Center, including the process of raptor rehabilitation from admission to release.  It's a fun way to learn about the exciting science of veterinary medicine! 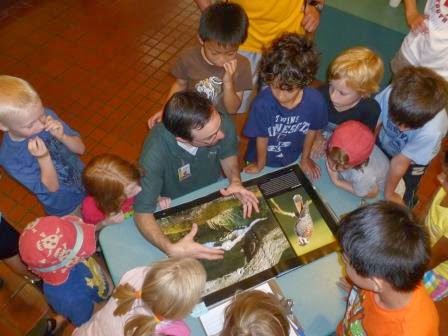 Enraptured with Raptors? Find out what characteristics all raptors have in common and the differences between owls, falcons, hawks, and other raptors.

In Grossology, you uncover the gross but fascinating characteristics of raptors. Learn why a Turkey Vulture poops on its feet and how it stays healthy even though it eats dead animals.

With the Wizarding World of Wildlife Camp, you will discover potions, herbology, transfiguration and the care of magical creatures. 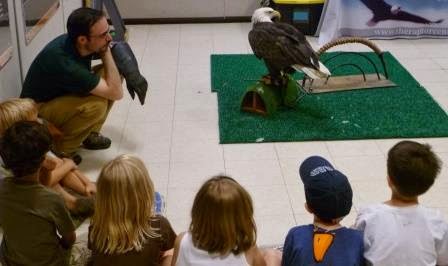 We wanted to share a great "small world" story with you.  This past Sunday, TRC staff Amber Burnette was with a shorebird workshop group as part of the Vallarta Bird Festival in Puerto Vallarta Mexico.  The leader was Manuel Grosselet, President of Tierra de Aves, bird bander, speaker, and author of numerous avian publications. The group was at a site called Boca de Tomate, close to Las Juntas village, near Puerto Vallarta, in the state of Jalisco, Mexico. 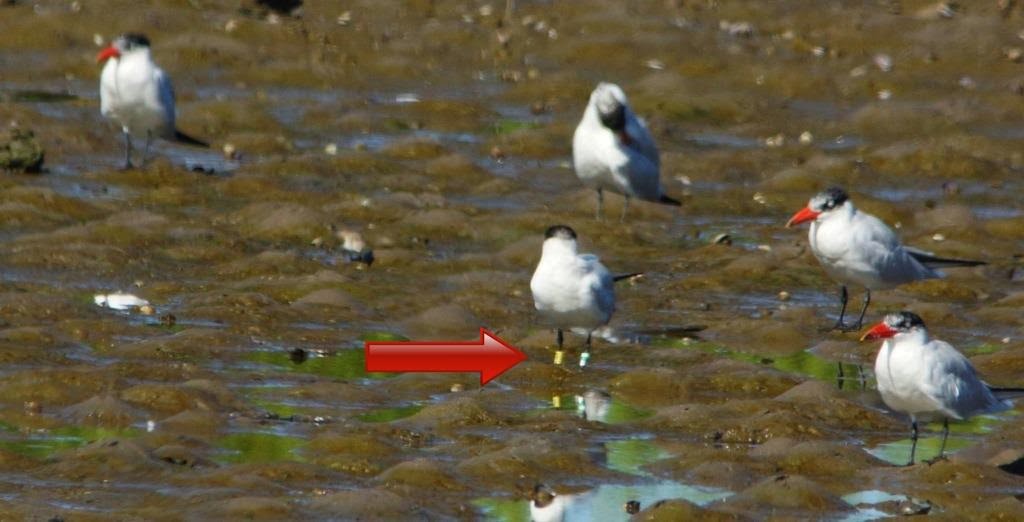 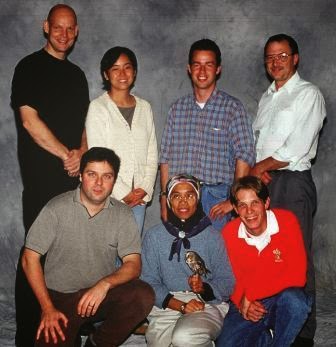 A Caspian tern was sighted in a group of about 10 of the species.  The bird was observed to have leg bands.  A spotting scope yielded the alpha-numeric code on the yellow band (though it is hard to see in the photo).  Manuel put the word out and very soon received a note from Dr. Yasuko Suzuki.  The bird was banded as a chick at Crescent Island in mid-Columbia River (near Pasco, Washington) in 2007 by Dr. Suzuki's research group.  The bird was banded as part of a study on the demography and movement of the species.

Dr. Suzuki worked with our TRC staff in the clinic from 2000-2001.  Here is a photo of Dr. Suzuki (top row, second from left) with our international staff at the time, from Germany, Japan, Belgium, Argentina, Malaysia, and Wales.


Dr. Suzuki is currently with the Department of Fisheries and Wildlife at Oregon State University.

What a great way that technology can yield information so quickly, and what a connection from the past to the present!
Posted by The Raptor Center at 12:42 PM 3 comments: