In 2017, we saw a record number of patients at The Raptor Center. Here, we break that down a bit. Where do these numbers come from, what do they mean, and how can you help protect raptors so they don't get injured or sick in the first place? 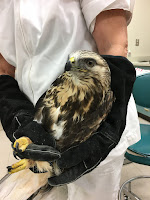 From January 1 to December 31 of 2017, TRC received 1,085 patients. That's 27 more patients, or roughly 2 more patients per month in 2017 than in 2016. That also means that our clinic took at least 2,170 radiographs, 1,085 blood samples, and performed 1,085 physical/ophthalmic exams. And that's just for the admissions! Care of our patients often requires our clinic staff to go through these processes more than once, and in some cases, many times.
(Left: a rough-legged hawk is held by one of our volunteers after having physical therapy performed to help recover from a wing fracture)

Let's break it down: First, which species did TRC see the most of in 2017? Last year, the four most prevalent species admitted were:
TRC also saw a higher number of rare or less common species. The following is a list, with the number of the species admitted in 2016 for comparison. In 2017, TRC admitted: 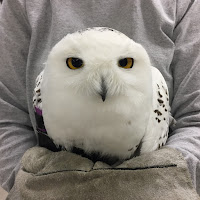 For species like snowy owls, we know why we had such high numbers - this year was an irruption year! But for other species, it can be difficult to ascertain the cause of injury or illness with 100% certainty - our clinic staff use symptoms and signals from the patient in order to better understand what might have occurred. Out of 1,085 patients, 877 were admitted due to 'undetermined' causes. In order to establish a determined reason the bird was injured, there must be a confirmed witness to the event. With that in mind, here are the number of patients that were brought into the TRC clinic for the following reasons:
(Right: one of our many snowy owl patients recovers from anesthesia after a bandage change)

*Several other patients were suspected to have collided with windows or vehicles because they were found close to windows/walls or on roads and due to the nature of their injuries. However, there was no witness to the event so it cannot be confirmed.

Many of these injuries and illnesses can be prevented. So what can you do to help?

Posted by The Raptor Center at 9:17 AM No comments: