We'd like to share some more photos of Gail, Mike, Maxime and Pi, from their second rehearsal at Target Field today.  There was a bit of a breeze, so Max and Pi enjoyed lifting their wings.  (Thank you to Adam Barnett for the photos.) 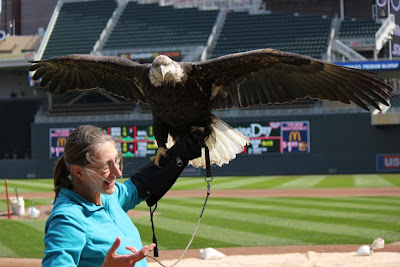 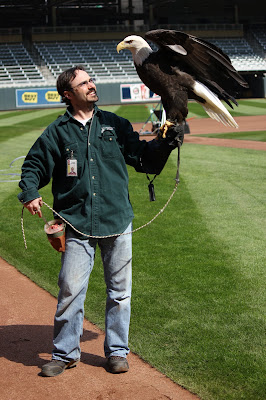 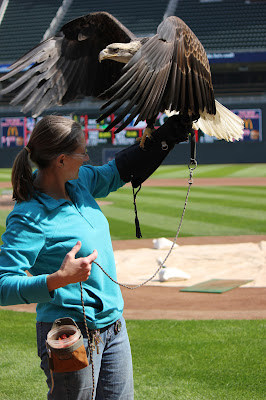 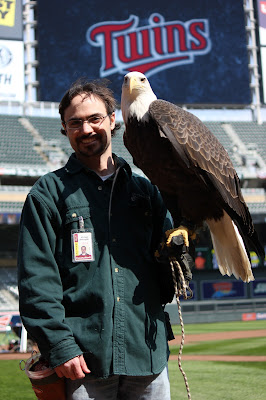 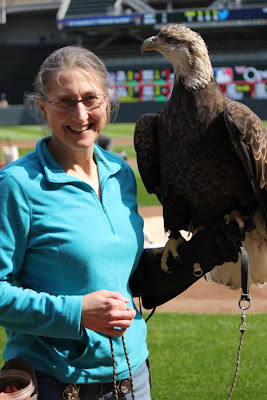 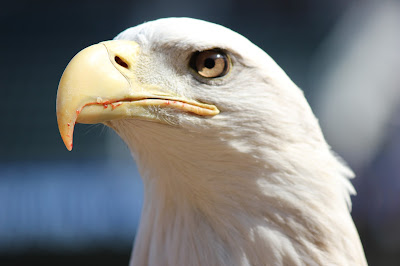 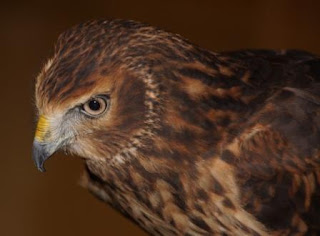 Meadow, TRC's education northern harrier, heard that it might be rainy this weekend.  In case you are stuck indoors, she would like to let you know about a free, downloadable activity book about her species!  TRC staff and volunteers put together a collection of facts, word finds, a maze and other fun things.  You can also download activity books for other species like barn, great horned, boreal and barn owls off our Just For Fun webpage.  We keep adding new things, so check back!
Posted by The Raptor Center at 5:32 AM No comments:

Lois the great horned owl asked us to pass along a message: 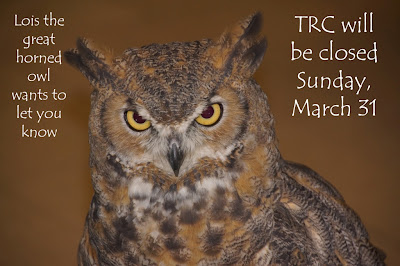 Posted by The Raptor Center at 11:39 AM No comments:

TRC will appear at the Minnesota Twins home opener game on April 1 during the National Anthem.  TRC staff will include Pi and Maxime the bald eagles.  The Twins Marketing Department, and all staff we were in contact with, were very accommodating to our request to have the birds visit the site before the game.  We have a great deal of respect for our winged co-workers, and to make sure that they would be comfortable with this venue, TRC staff Gail Buhl and Mike Billington visited the field with Pi and Maxime (one of the birds in our Adopt a Raptor program) on Tuesday.

Twins staff helped in this process by first allowing grounds crew to work around the birds.  Then the rolling video was introduced, followed by the Jumbotron and graphics.  Finally, the music that would play, and the announcing, were done. 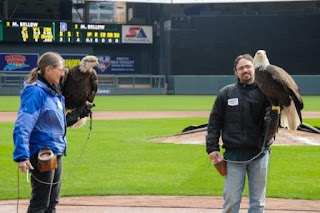 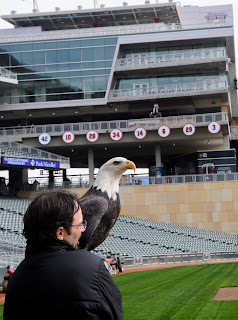 We'll be back on Friday for one more pre-game visit - watch for more photos!

We hope to take this opportunity in our appearance next week to engage and educate thousands of new friends with the work we do.

A final note - Maxime did "christen" home plate while we were there!
(Thank you to TRC volunteer Les Conrad for the photos!)

Posted by The Raptor Center at 6:00 AM 3 comments: 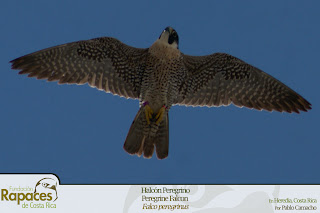 We hope you enjoyed the posting on March 21 of the peregrine falcon hatched and banded in Indiana, who then made her way to Costa Rica.  Pablo Camacho provided photos and identification of the bird, along with recording her activities.  He sent a post to our Facebook page, with further information in Spanish.

Dr. Luis Cruz, former TRC clinical resident from Costa Rica, has kindly translated that post into English, and collected some photos to send along to TRC friends.

We thank everyone for sharing in this story.  We also ask that if anyone spots the peregrine if she heads back to the US, please let us know! 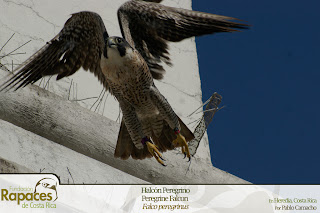 Pablo Camacho (pcamacho@rapacesdecostarica.com)
Translation: Dr. Luis Cruz-Martinez
So many centuries, so many worlds, so much space… and to coincide…Just like Alberto Escobar’s famous song: that’s the feeling when “you find the needle in the haystack”.


Just imagine our luck: finding here in our own city and town, a banded peregrine falcon (Falco peregrinus) from the thousands of falcons that migrate through America. In North America, peregrine falcons are banded for monitoring and research purposes. Each band is different and it works like their ID. This particular bird allowed us to get close enough to identify its band numbers. Usually, these birds perch high up in towers or skyscrapers which make their identification challenging.

On January 31st at 7:18 am, I witnessed a young Peregrine falcon hunting a Rock dove (Columba livia) in the west side of the Immaculate Conception Church, in Cubujuquí, Heredia, Costa Rica. To my surprise I noticed a purple band on its right leg and a black (78) over red band (D) on its left leg. Here is when my true fascination began.
“Immaculada” photographed in the southeastern side of the Immaculate Conception Church in Heredia, Costa Rica on January 31st 2013.

I then went to the Midwest Peregrine Falcon database (http://www.midwestperegrine.org/) to track down its band number (b/r  78/D FWS 1687-30263) and found out that this female falcon hatched on May 1st 2012 in Whiting Lake, Indiana, over 2200 miles from this costarican town. It is so exciting to think about the ordeals and the mysteries surrounding this young bird’s journey. This is something that I’m passionate about!
Digging further into her story, both of her parents hatched in Illinois. “Hughes” (7-yr old; FWS band # 2206-49471) and Nancy (11-yrs old; FWS Nº 1807-77797) are “siblings” from different years (2006 and 2002 respectively). “Immaculate” has a sister of which her whereabouts are unknown.
“Immaculate’s” life history (http://www.midwestperegrine.org/).
On March 14th around 2:53 pm we were being interviewed by a local TV news channel regarding her sighting a few months ago when she suddenly and unexpectedly appeared before us! There she was after 43 days since I first saw her, she perched in the same spot and this time the people really started to notice her. In fact some people started to call her the “Inmaculada” la peregrina (Immaculate Peregrine).

“Immaculada Peregrine”  has captivated the attention of many people that walk by the park every day.

Before the observations from March 14th, we observed, almost on a daily basis, a young peregrine falcon flying and hunting doves in Heredia’s Central Park and Los Angeles Park. While it was probably her, only on 4 occasions we were able to see her leg bands. In one occasion, she hunted 3 doves in a single day! 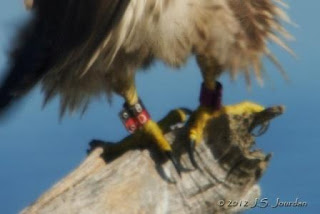 Another interesting fact about her, is that my friend Jerry Jourdan recorded when she first started her journey towards her wintering grounds on August 28th 2012 in Pointe Mouillee, Monroe, Michigan (http://jerryjourdan.blogspot.com/2013/03/local-bird-in-paradise-16-mar-2013.html), about 220 miles east from the nest she hatched from.


I’m not a fan of naming wild animals but in this case it was necessary to give her a name because of the great acceptance and reaction among the inhabitants of Heredia. This has been a wonderful educational tool to connect with people and to raise awareness about the marvelous but hidden phenomenon of raptor migration that occurs in Costa Rica ever year. In the northern slopes of Costa Rica, in the Talamanca Mountain ranges, we can observe the second largest concentration of migratory raptors in the world! (http://www.kekoldicr.com/). 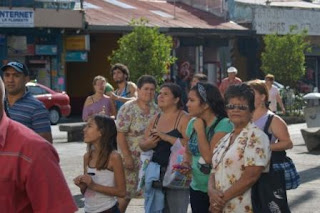 Her name has nothing to do with her physical appearance because immaculate means spotless, clean, or free of stains and the plumage pattern of young peregrine falcons are full of “stains”. Her name has no religious connotations either. It is derived from the geographical location where she was first spotted, Heredia city, Heredia, Costa Rica. This city was founded in 1763 from a village named Immaculate Conception of Cubujuquí and also because of the bird’s preferences of eating doves in the city’s churches.

It is noteworthy to mention that peregrine falcons have a high fidelity for their migratory route and therefore, as long as she lives, she will probably keep coming back here to eat a few more doves and I’m sure the inhabitants of Heredia will anxiously wait for 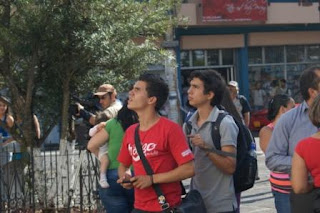 I now ask our Central and North American brothers and sisters to be on the look for Immaculate’s passing and movements so we can keep putting together the amazing puzzle of her migratory journey.

Posted by The Raptor Center at 5:19 AM No comments:

Raptor Tails for Young Learners - Sign up for April 2 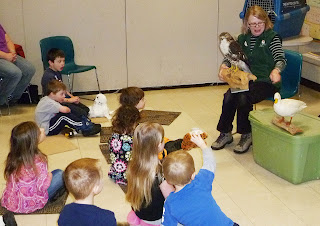 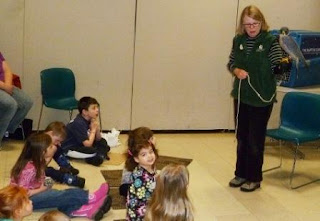 There is still space to sign up for our April 2 Raptor Tails!  The topic is Raptor Watching. Raptor Tails are activity-oriented learning experiences for ages 3-5 about raptors and their environment.  Children will hear stories, take part in activities, and get to meet a live raptor each session.  The goal of this program is for pre-schoolers to develop a positive relationship with raptors and the environment.

Click here for more information.
Posted by The Raptor Center at 6:00 AM No comments:


This BBC article describes how an industrial designer was inspired to design a super-strong bike helmet, which protect cyclists’ heads by mimicking features of a woodpecker’s distinctive anatomy.

Posted by The Raptor Center at 6:00 AM No comments:

TRC received a report of a peregrine hatched in Indiana in 2012, and who has been spotted in Costa Rica since January 2013.  Pablo Camacho works in the Raptor of Costa Rica Foundation (www.rapacesdecostarica.org). Apparently the bird has been "vacationing" at the Iglesia Inmaculada Concepcion Catholic Church de Heredia.  According to Pablo the bird has been hunting pigeons for at least the past 44 days, from the time he first observed her on about January 31.  He was able to get close enough to photograph the bird and verify that the federal band on her right leg matches Midwest Peregrine database (1687-30263) and color band b/r 78/D.

The leg bands identified the bird as being hatched at the BP Plant in Whiting Lake County, Indiana; she was banded on May 21 by INDNR staff John Castrale.