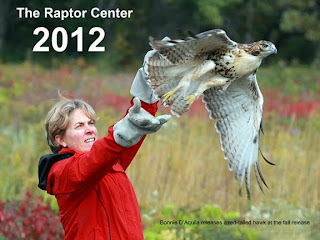 If you haven't purchased your 2012 Raptor Center calendar, we still have some available at our front desk, or through the University's Bookstores online! They are $20, and the proceeds go to support our winged ambassadors who help us reach 200,000 people each year, of every age and from every walk of life.

The calendar has photos of our education staff birds, as well as our clinic and flight activities.
Posted by The Raptor Center at 7:37 AM No comments:

We have received 710 patients so far this year. We currently have 47.

Thank you and Happy Holidays from TRC 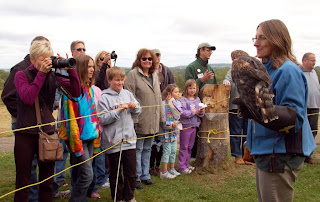 The Raptor Center would like to thank each and every one of our friends for their support this year. We couldn’t continue our work without you. Whether you have already made a gift this year or plan to, please know that each one has the power to make a difference in the lives of raptors and humans alike.

Please accept our wishes for a happy and safe holiday season, and we hope to see you soon in 2012. 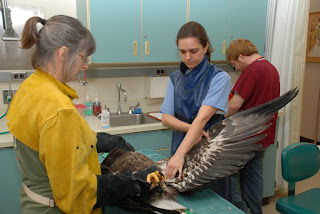 Click here for an e-card from TRC!
Posted by The Raptor Center at 4:55 AM No comments:

The University of Minnesota's Institute on the Environment (IonE) selected a Raptor Center project for funding in the second round of awards for its Mini Grant program. In the project, "Spent Lead Ammunition and Bald Eagles: A Model for Dealing With Conflicts in Ecosystem Health," principal investigator (and Raptor Center co-founder) Dr. Patrick Redig and colleagues will develop a proposal for a mock congressional hearing on a mock policy considering use of non-lead ammunition for deer hunting in Minnesota. The IonE Mini Grant program encourages collaboration on environmental themes among faculty, staff, and students across University of Minnesota disciplines, units, and campuses.
Posted by The Raptor Center at 9:06 AM No comments:

We have received 682 patients so far this year. We currently have 48.

Update on Harley the Bald Eagle 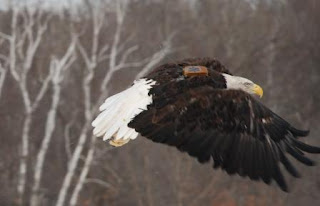 Early this fall, we lost signal from Harley’s transmitter. The last few transmissions were from northern Minnesota. We searched the area fairly thoroughly and finally concluded we had lost contact.

We have a few ideas on what may have happened to the transmitter: Harley’s transmitter is faulty and just stopped working, has fallen off and broke, or he has gotten into some other trouble.

While his transmitter was set and designed with a “mortality signal” which starts to transmit when the unit has not moved for 24 hours, the signal has never gone off. Many of you may remember that we had transmission problems around last Christmas 2010, while Harley was in Arkansas. After a brief period of time, the transmitter came back on-line with no outside assistance. We were hopeful that this was the case again this time, but it doesn’t appear to be so.

While we will miss continuing to follow Harley’s travels, it is amazing to reflect on how much we learned from watching one eagle’s movements. The scientists among us will be quick to acknowledge that one set of data points don’t tell us about a whole species, but Harley did have some very interesting travels, including his winter in Arkansas, several summer jaunts to the Northern Minnesota and the Canadian border and quite a bit of time in Wisconsin, near where he was originally recovered. We look forward to incorporating this data into some new lesson plans for school age children. We wish Harley the best, wherever he is.

Snowy Owls in the News

MINNEAPOLIS (WCCO) — It’s one of those rare treats of Mother Nature. A bird seldom seen south of the Canadian border is becoming a common sight among many this winter, as Minnesotans come face to face with the snowy owl.
“They typically stay up in the tundra,” said Mark Martell, the director of bird conservation for Audubon Minnesota.
According to Martell, the eruption of snowy owls all across the state is the result of bare cupboards in Canada.
“They feed on Lemmings, which are cyclical, die off and when that happens, the young birds have to come south to find food,” explained Martell. “That’s what they’re doing.”
What’s so unusual is that the snowy owls are coming down in such large numbers. Hundreds have been sighted all across the northern tier states, even as far south as Kansas. On Tuesday, a snowy owl was photographed near the entrance to New York City harbor.
Here in Minnesota, they are being spotted largely in open areas and farm country, even Fort Snelling National Cemetery and MSP International Airport. The owls prefer open terrain because it is similar to the openness of the tundra, said Martell.
“We’ve had four come in so far this year,” said Dr. Julie Ponder of the University of Minnesota’a Raptor Center.
Ponder says it’s a bit unusual that the clinic is seeing more adults than juveniles, as has been the experience in past years. Ponder explains that the smaller owls are typically more prone to starvation than the adult birds.
“Usually, we’ll have seen the ‘snowys’ come in by now. The first ones are down and if they don’t figure out another food source, they starve,” said Ponder.
Getting enough food to eat is just one of the challenges. Because their normal habitat is complete wilderness, the owls are unfamiliar with vehicle traffic and power lines. Most of the owls that get admitted to the Raptor Center suffer a combination of starvation or broken bones.
Ponder added they will be bracing for more owls in the coming weeks, as word spreads and wildlife enthusiasts keep careful watch for these rare birds from the north.
“It’s pretty dramatic to see a huge white owl,” said Ponder.
Posted by The Raptor Center at 6:04 AM No comments:

American Kestrel Next Boxes at TRC

Members of our Youth Raptor Corp (YRC) have constructed American Kestrel nestboxes for sale at The Raptor Center.

These boxes are used by American Kestrels, which are small, cavity-nesting falcons. The first two photos are of the boxes for sale ($25, and includes nest box placement instructions). The last photo is an example of a female chick who has nested in a similar box. 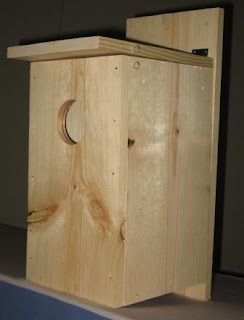 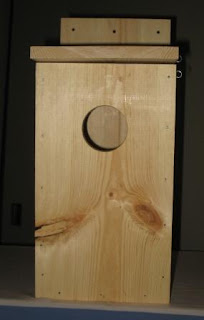 YRC is a service learning club for students in grades 5-8. The members gain an understanding of raptors and the world they share with humans with hands on activities, instructional sessions with staff and volunteers, and reading about raptor topics. 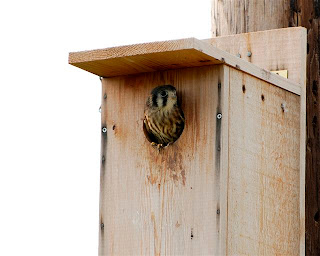 Posted by The Raptor Center at 12:40 PM No comments: