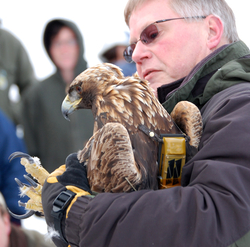 Recent January surveys coordinated by the National Eagle Center and carried out by volunteers have uncovered a regular wintering population of at least 80 golden eagles using the coulees and bluffs along the Mississippi River from Red Wing, MN to LaCrosse, WI.  A winter population of golden eagles along the Upper Mississippi River raises new and important management questions and challenges. Learning the breeding origin (or origins) of these birds is of high importance. The breeding population in northern Ontario is thought to be small and thus vulnerable. If there are birds are moving from western breeding areas they could be severely impacted by wind generator projects proposed for the Great Plains and western Minnesota.

Golden Eagle 46 (pictured above) has a satellite transmitter that shows the bird's movements.Golden Eagle 46 was trapped on a "goat prairie" on January 17, 2011 just west of Wabasha, Minnesota. The bird was released on a bluff near the area it was trapped later that day.


Mark Martell of Audubon Minnesota supplied the map in this post (see below) that shows the data points of recent movement.  He is in Manitoba very bear the southern end of Hudson Bay.  He has been making his way south since late September. 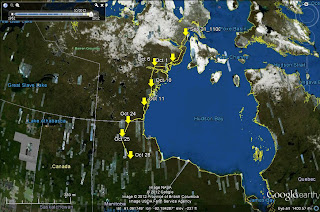