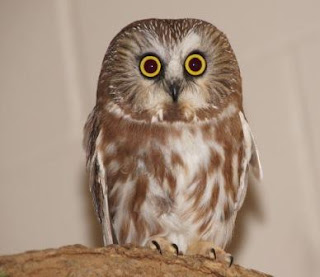 Since the first of October this year, TRC’s clinic has admitted 15 Northern saw-whet owls. This is not unusual because the little owls typically make their winter movements during this time. What is unusual, however, is that five (5) of them were already banded! We do not yet know their individual stories, but we expect to receive information from the Bird Banding Lab in the near future.


Why were these owls admitted? The majority of them suffered traumatic injuries from colliding with objects such as windows. Head and internal trauma were common injuries, but the bird pictured here suffered from a fractured pelvis. This adult female saw-whet was a restless patient, but after about 2 weeks of cage rest and one week of exercise, her energies were once again put into surviving life in the wild. 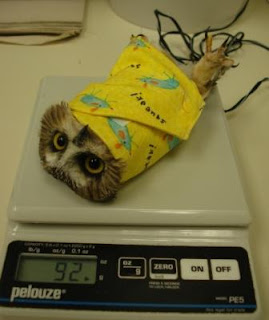 Northern Saw-whet owls are the smallest owls in MN. They weigh in at only 65-100g (females are larger than males), live in woodland areas in northern and central MN (some now nest in the twin cities area) and are cavity nesters. Their diet consists primarily of mice, the availability of which often determines the extent of their winter movements.