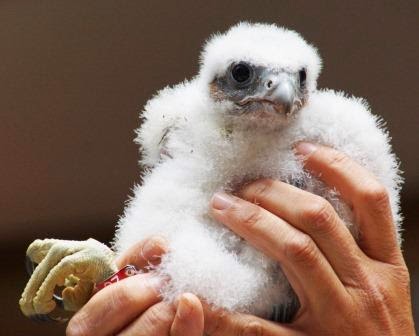 Three peregrine chicks were banded at a site in downtown Minneapolis, which has had the names of Multifoods Center, City Center, and currently 33 S. 6th Street.   This site is historically very important to the Midwest peregrine falcon restoration project.  It was the first urban site to host a “hack box” of peregrine chicks, and the first Minnesota site since the 1960s to produce a wild-hatched peregrine that would fledge successfully. In 1985, Dr. Harrison “Bud” Tordoff and Dr. Patrick T. Redig, co-founder of The Raptor Center, approached the building management team at 33 South 6th Street to inquire about putting a “hack box" (also known as a "release box") on the roof. This release box would house young captive-bred peregrine chicks that would be the start of a reintroduction of the species.

Here is a video taken by the AHC at last year's banding at this site.

The history of the Midwest peregrine restoration project, as well as a searchable database for the public to look up individual birds, sites and states, is here.