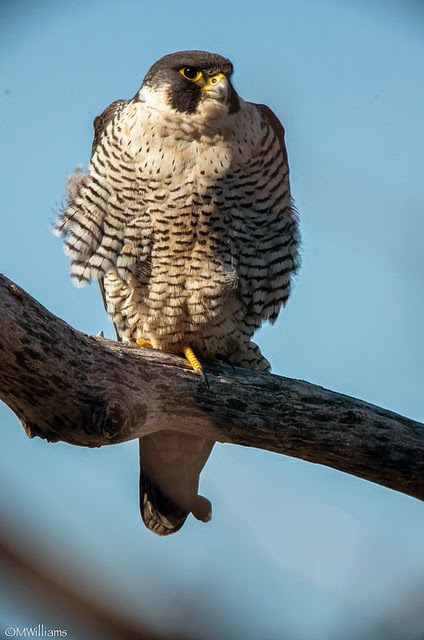 Peregrine falcons are nesting right now in the Midwest.  We wanted to share a story of one bird who was a former TRC patient. She was banded with a black/red band, 13/U, in June 2011, in Grand Forks, ND.  She found her way to St Paul, MN two years later (last year, 2013).  A friend of TRC’s called to report seeing her down near the Mississippi River, and volunteer David Schreiber, who does carpentry work as well as transport for TRC, went out to rescue her.  She had soft tissue injuries to her wings and legs.  She was treated in TRC's clinic, and was released after a couple of weeks.

This year, she is at a St Paul site – the Ford Parkway/ Lock and Dam #1.  The previous female was recovered deceased in January of 2014, after hitting a window, so the site was open to a new breeding female.

Thank you to Mike Williams for the photos of the bird.  You can find information on birds, sites and the Midwest Peregrine Recovery project on the Midwest Peregrine Society’s webpage here.  A story on this bird and the history of the project appears in this week’s edition of the Villager, a St Paul neighborhood newspaper.