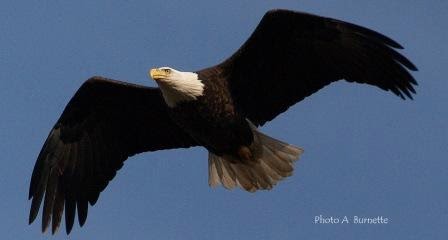 Utah state wildlife officials recently announced that the National Wildlife Health Center (USGS) has confirmed that the recent die-off of eagles there is the result of West Nile virus infection. It appears that the eagles were exposed to the virus through scavenging among over 20,000 dead eared grebes found along the Great Salt Lake shoreline. Over 50 bald eagles have been confirmed dead and more carcasses are expected to be found. West Nile virus infection was also identified as the cause of death in the eared grebes, a species not previously recorded with the disease.

Since West Nile virus was first identified in Minnesota in 2002, The Raptor Center has documented 11 cases of infection in eagles. The situation in Utah this winter raises the question of where the grebes were exposed to the virus, which is traditionally considered to be mosquito-borne. The question of exposure of the eagles through scavenging also raises questions not previously considered critical.

For more information, here is a link to the pdf National Wildlife Health Center/ USGS press release, and Wildlife Disease Information Network blog piece.
Posted by The Raptor Center at 7:36 AM