Checking in with Harley the Bald Eagle We haven't check in with Harley for a bit. Harley remains in northern Minnesota on the Iron Range east of Hibbing and south of Virginia. In the past few weeks he has moved slowly north following the St. Louis River moving about 12 miles and is currently 6 miles west of Evelyth, MN (fig 1).

Harley completed his spring migration from Arkansas on March 16 and remained in the SW part of Douglas County, Wis until May 6. On May 7 he started moving north and covered 283 miles by May 15 when he was in southern Ontario. He remained in southern Ontario/northern Minnesota through June 10. On June 11 he moved 72 miles south on to the Iron Range of MN about 12 mi. NW of Hibbing, MN. He ranged over an area to the west of Hibbing which was about 21 miles long and 8 miles wide from June 11 to July 2 and then decided the area east of Hibbing was more his liking and has made his living along a swath of the north woods between Hibbing and Evelyth, about 21 miles long (fig 2). (You can click on each map picture to make it larger.) 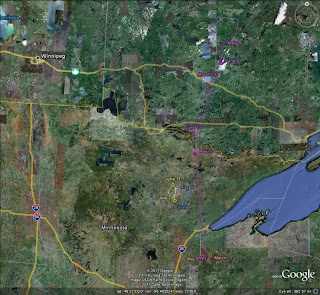 Posted by The Raptor Center at 5:04 AM